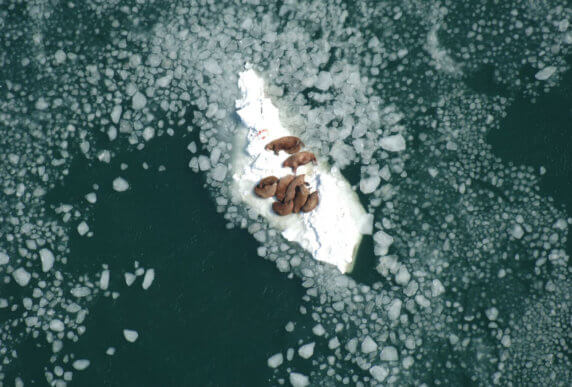 Walruses nursing their calves near Nunivak Island, one of the islands that now has a buffer zone to protect wildlife and subsistence areas from ship traffic. Credit: Brad Benter, USFWS (CC BY-NC-ND 2.0)

Does it feel like the Arctic just can’t catch a break these days?

Living in Alaska, I see changes to the climate first hand and I hear stories from those living in small communities along the Bering Sea and Arctic Ocean. I’m bombarded with relentless news coverage reminding me that the Arctic is melting, communities are falling into the sea, and that not even the Arctic is immune to the plastic pollution that plagues all of the world’s oceans.

This paints a gloomy picture of the Arctic, but you’ll be relieved to know there’s good news that just isn’t getting enough attention. Let me tell you about three recent victories for the Arctic, ones that will protect Arctic communities, reduce pollution from shipping, and safeguard marine life in the Bering Sea.

As sea ice recedes further and further each summer, more ships are making their way through the Bering Sea to travel the Northwest Passage and the Northern Sea Route, cutting costs and time. Along the way, they pass by Indigenous communities and the wildlife—birds, fish, whales, walrus, and seals—that they rely on for subsistence. Oil spills are a major risk, as are disturbances to marine mammals from deadly collisions and deafening noise, which prevents communication, increases stress, and drives animals away from their habitat.

The good news: After years of intense advocacy by Pacific Environment and our partners, the international community has agreed to protect three islands in the Bering Sea with buffer zones to keep large ships away. Newly established shipping routes minimize accidents and keep ships away from sensitive marine areas and subsistence hunters. Along with our allies, we are now looking to capitalize on this win and establish similar protections further north in the Arctic Ocean.

The world’s dirtiest fuel is also the most commonly carried in Arctic waters. Heavy fuel oil literally comes from the bottom of the barrel and is thicker than asphalt. Ships burning this dirty fuel spew black carbon onto ice, where it traps heat and accelerates melting. If this oil ever spilled in icy waters, it would be nearly impossible to clean up.

The good news: Heavy fuel oil has been banned in Antarctica since 2011, and international decision-makers have finally agreed to consider banishing it from the Arctic as well. This is a major step toward achieving a fossil fuel free Arctic. We’ll be keeping up the pressure to make sure nations agree to adopt the ban as soon as possible while ensuring that the needs of Indigenous communities and protections for wildlife are met.

The shipping industry emits more greenhouse gas pollution than all of Germany, the world’s sixth largest polluter. One large cargo ship can release as much pollution as 50 million cars. If left unchecked, shipping pollution will grow exponentially, sinking the Paris Agreement and moving the planet closer to climate chaos.

The good news: The international commitment to cut shipping’s carbon pollution by half was developed to meet the goals of the Paris Agreement. It’s a step in the right direction, but we think there is plenty of room for improvement. Pacific Environment and our partners will demand the shipping industry do its part to fight climate change and get ships off fossil fuels even faster: by 2030.

With these victories, we have the momentum to continue advocating for more and stronger protections in the Arctic. By giving local communities a voice and by working with a broad range of allies, we are creating international solutions to some of the most immediate environmental concerns in the Arctic. Together, we can make a difference in the Arctic, and these victories prove it.