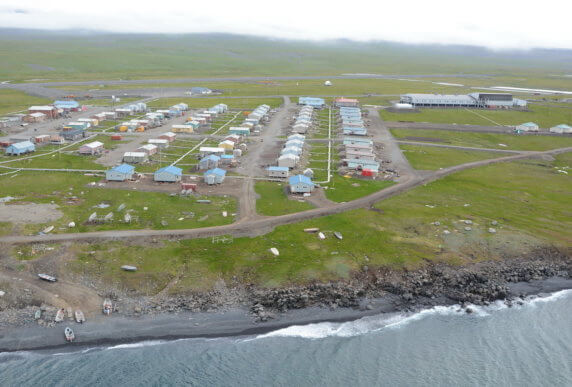 Savoonga, Alaska on St. Lawrence Island. The community is now protected by a buffer zone to keep passing ships away from hunters and wildlife habitat.

Reporting directly from London, I’m excited to tell you that yesterday was a big day for Arctic waters and wildlife.

Indigenous leaders and environmental activists like me convinced the international community to adopt new rules that require ships to avoid fragile marine ecosystems, reducing the threat of oil spills, environmental disasters, and harm to wildlife and subsistence hunters.

This is a hard-won victory—the culmination of over five years of community organizing and savvy international advocacy.

Arctic communities in the remote Bering Strait region between Alaska and Russia rely heavily on healthy oceans for food and cultural traditions.

Then, we and indigenous allies made sure that international decision-makers heed local input. In fact, it was our testimony that ultimately moved international lawmakers to approve these protections at the International Maritime Organization—the U.N. agency in London regulating the high seas.

The fragile Arctic needs special protections like these to defend it against the many looming harms of increasing ship traffic.

Once rarely seen, ships are quickly becoming a familiar sight in the Bering Strait region. We and allies are working hard to put protections in place well ahead of the anticipated onslaught of commercial ship traffic.

And we know that these protections work. A couple of years ago local communities and environmental allies pushed for similar protections in the Aleutian Islands. As a result, ship traffic has dramatically shifted away from sensitive and dangerous areas.

You can see why these protections are a big win for Arctic communities. But much remains to be done to fully protect the fragile Arctic from the worst harms of commercial industrialization, with increased shipping driving it.

In the coming months, Pacific Environment will campaign to establish similar protections farther north into the Beaufort and Chukchi Seas. We are also pushing the international community to ban heavy fuel oil, the world’s dirtiest fuel, from the Arctic. And we’re pushing the shipping industry to do its part to move completely to clean energy sources.

Thank you for standing with us and our community allies for a healthy Arctic.

Report
All Aboard: The U.S. Can Help Ships Kick Fossil Fuels