This is What Climate Change Looks Like in Alaska—Right Now 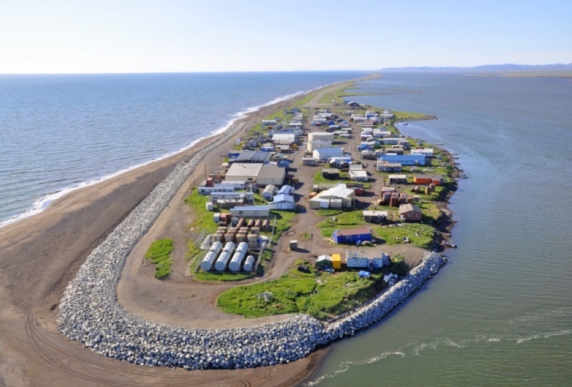 A sea wall protects the village of Kivalina from the battering waves of the Chukchi Sea. The village recently secured funding to build a new school at a future relocation site.

In Utqiaġvik, Alaska, the northernmost community in the United States, last winter’s temperatures were so warm that algorithms in weather monitoring stations were flagging them as false. Biologist Craig George says “the term is no longer ‘climate change’ in Utqiaġvik, it’s ‘climate changed.’”

With Alaska and the rest of the Arctic warming twice as fast as the rest of the globe, these temperatures are not yearly anomalies, they are daily occurrences. Drawing on stories reported throughout the past year, let’s explore what climate change actually looks like in Alaska and how communities are responding.

In the 1950s, melting permafrost, erosion, and flooding forced Chefornak to move to higher ground. Today, this Yupik village in the middle of the massive Yukon-Kuskokwim Delta is gearing up for another big move. This time, however, they face new challenges. Most of the newer structures are decidedly less movable than before, making relocation several times more costly than the original move. However, staying in place and building a seawall would cost $25 million dollars and it would not even address the other pressing issue: melting permafrost, which threatens to destroy homes, roads, runways, pipes, and other infrastructure.

It’s a common story along Alaska’s west coast: Small, Alaska Native villages are facing enormous existential challenges. At least 31 communities face imminent threats from the effects of a changed climate. Many have voted to relocate, some have identified new sites, but only a few have acquired any funds to pay for these urgent measures.

“Newtok to Congress: thank you for saving our village” – Alaska Public Media

Newtok is one of the few villages that has secured federal funding. In 1994, the village voted to relocate based on the same environmental factors as their neighbors in Chefornak are now, 60 miles to the south. In 2003, the village acquired a town site after a land swap with the U.S. Fish and Wildlife Service, and they began plans for the brand new community of Mertarvik. The next step was securing funding. After years of hard work by local leaders and state and federal officials, the most recent budget increase for the Denali Commission devotes $15 million toward the move. It’s far from the estimated $100 million needed to relocate every resident to Mertarvik, but it’s a significant step forward.

An important element to remember is that these life-altering decisions are not only guided by money, but also by cultural history. As Robin Bronen, executive director of the Alaska Institute for Justice, explains, “The right to self-determination is the most critical right to protect when you’re talking about the way that climate change is affecting the habitability of the places where people have lived for generations.”

The many rivers snaking through Alaska’s tundra and forest landscapes become snowmachine highways in the wintertime, providing quick access to neighboring communities and hunting grounds. Likewise, the frozen sea enables hunters to travel for miles across the ocean in search of marine mammals that are the backbone of a traditional coastal subsistence way of life. Above-average temperatures are creating dangerous ice conditions, if there is any ice at all. When the waterways do freeze, it’s often insufficient snow cover that becomes a problem, as the bare ice can wreak havoc on snowmachine treads.

The lack of ice and cold can also disrupt traditions. In Pt. Hope, an Inupiat village located at the tip of a tiny peninsula poking into the Chukchi Sea, residents have traditionally celebrated the arrival of the ice by sharing fermented bowhead whale tails. Usually observed in late September or early October, last year the festivities were delayed until just three days before Thanksgiving when the ice finally arrived. “The cold, the ice, the animals is everything to us,” says Pt. Hope Mayor Steve Oomittuk, “We’ve always lived in the cold.”

“In doomed Alaska town, hunters turn to drones and caribou as ice melts” – The Guardian

As the weather and the ice become more unpredictable and dangerous, people are finding new ways to maintain safe and healthy traditional ways of life. In Shishmaref, an Inupiat village slightly north of where the Bering Sea meets the Chukchi, residents are utilizing a relatively new technology to help with an ancient tradition. Hunters are using drones to find safe routes over the ice, allowing them to bypass thin areas and reduce the risk of losing their snowmachines and supplies, or their lives.

Residents are also turning to land mammals for subsistence. As the climate has warmed in Alaska, vegetation has shifted, and Alaska’s giant herds of caribou are venturing beyond their historical routes. They now roam close enough to Shishmaref that it is becoming easier, and safer, to harvest the caribou, to supplement a diet that previously relied more heavily on marine mammals.

Across Alaska, communities are adapting subsistence activities that their ancestors practiced for thousands of years. To ensure cultural cohesion, communities are holding meetings to talk about the climate and how to adapt—all with the goal of creating regional plans to protect their valued resources and drawing on traditional and local knowledge to find solutions that honor cultural traditions.

“Anchorage is confronting more rapid climate change, but has few dollars to address it” – PRI

Even Alaska’s largest city is facing challenges in a changed climate. Anchorage with its 300,000 residents is nestled between the mountains and the swift tides of the Cook Inlet. Half of all cargo arriving to the state by sea passes through the Port of Anchorage. The meltwater of Southcentral Alaska’s glaciers carries rocks, sand, and dirt into the inlet, forcing the port to spend an increasing amount of time and money to dredge it back out. Already faced with spending $700 million dollars to upgrade the port’s aging infrastructure, the accelerated melting of the glaciers and shallowing of the inlet is a burden on local and state budgets.

Alaska’s second largest metro area, Fairbanks, is dealing with a different kind of problem. Interior Alaska is no stranger to hot and dry conditions (Fairbanks routinely hits 80 degrees in the summer), but as the conditions become more extreme, so do wildfires sparked by lightening. These fires cause dangerous air pollution, and the smoke carries tiny particulates that can harm people’s breathing.

By now, it should be clear that climate change in Alaska is not only a problem for communities, it’s a statewide problem. And now, for the first time, the State of Alaska is taking an active role in the fight against climate change.

“‘Impossible to Ignore’: Why Alaska Is Crafting a Plan to Fight Climate Change” – New York Times

Last fall, Governor Bill Walker created the Climate Action for Alaska task force. Composed of a diverse team of Alaskans and state agency leads, the task force is developing an action plan to guide the State of Alaska in its response to climate change. The group submitted their final recommendations to the governor in September 2018, which range from increasing public awareness on the impacts of climate change to cutting oil, gas and mining industry greenhouse gas emissions by 30% over 2005 levels by 2030. Also included are several recommendations that directly name communities and the challenges they are facing, many that I’ve mentioned above, such as Noatak’s move to Mertarvik.

Nevertheless, it still gives an Alaskan like me hope, because it represents a shift among leaders to take responsibility for the state’s future. It means that we’re willing to sit at a table together, whether from the village or the city, whether we work for Big Oil or Small Enviros, and figure out how to stop climate change from destroying our shared home.

With the constant gloom and doom pouring out of news outlets about a disaster-prone future, it’s important to remember that people and communities are experiencing climate change right now.

Close your eyes and put your finger anywhere on a map of Alaska. Wherever it lands, there’s a community engaged in a daily battle with the climate, and where leaders and citizens alike are developing community-driven responses to these powerful natural forces.

Pacific Environment and our partners on the frontlines of climate change are part of this response. We help amplify local voices and advocate for the interests of coastal communities at international governance institutions. We work to keep shipping in the Arctic, which is increasing as the sea ice fades, safe and clean, as well as protecting marine mammals and their habitat and giving communities the tools to protect themselves. And we’ve had some recent, exciting successes on these fronts.

If you want to help and be a part of the solution, one of the most important things you can do is to be informed, and to share what you know with others. Information leads to knowledge, which leads to action, which leads to change.

We hope these stories motivate and inspire you, and we hope you use them to show others who may be less inclined to take action that this is what climate change looks like in Alaska today, and soon, it’s what it could look like in their community, too. We must act on climate change now. Will you join us?