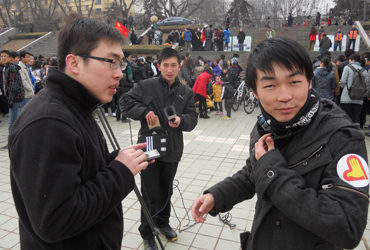 At the stage of Flower Theater in Lanzhou City, Gansu Province, a group of environmental volunteers engaged in a strange but wonderful rehearsal. Each of them took a deep breath, and then…well, if you closed your eyes you might hear breezes whispering in your ears, or the symphony of a lush virgin forest, a variety of birds flying around you. Or it might sound like a farm, bustling with happy cattle and sheep. The volunteers were playing and experiencing nature using their own voices.

Environmental advocacy on river pollution is a critical issue in China, but advocacy efforts often fall flat. In my experience, part of the challenge is that touting slogans about environmental protection does little to change peoples’ consciousness. If you want more people to engage in protecting the environment, you have to first help them develop a relationship with nature, and a love of the environment. This year our organization wanted to try something a little different: we wanted to make the concept of environmental protection root in peoples’ hearts. We hoped that through community theater we could help foster this kind of real awareness of the environment.

With the help from American Allegra Fonda-Bonardi, who graduated from Oberlin College and came to Lanzhou with the support of a Compton Mentor Fellowshop, Green Camel Bell explored how to use community theater in Lanzhou as a new way of doing environmental education. Green Camel Bell recruited about 30 local children and their parents as volunteers and actors for our first community theater event. Allegra taught us a series of theater games, based on the work of Hector Aristizabal, which helped participants create their own environmental stories and act them out. Rehearsals continued for a month while the participants created their own scripts and stage props. “This is our own story, and we like playing games together with Teacher Allegra,” one young participant told me. The children performed their final piece during the Chinese New Year Celebration at the Lanzhou Environmental Protection Agency.

Later, Green Camel Bell recruited 20 new volunteers from different backgrounds to form a community theater education team called “Bean Sprouts.” The first piece highlighted the reality of water pollution in the Yellow River, showing how and why the river has become so polluted. But the end result was a drama that was in my opinion a bit boring and did little to arouse peoples’ sympathy. So we then tried to encourage more innovative ideas and performances that would do more to wake up peoples’ hearts.

Allegra helped us play interesting games to inspire new ideas. For example, we had actors perform nature – which resulted in the loud scene I described. In this game participants took a deep breath, and then let out a long a continuous call, until their breath ran out. Then another breath and call, then another. At first, everyone sounded kind of mechanical, but gradually magical things happened as we tuned into each other and the environment around us. We realized we could change our sound to harmonize with each other and our surroundings. As one volunteer described, “Sometimes we feel like being the ocean, sometimes we are flying across forests and grasslands. When someone cries like a bird, a variety of other animal sounds follow, and we are suddenly transported into a vibrant jungle.” Weeks after these exercises, the volunteers were still reflecting on the feeling of man and nature combined—something they rarely get to experience in their everyday lives.

After three months of practice, Allegra, the Bean Sprouts, and Green Camel Bell organized a forum in Lanzhou on environment education through community theater,  the first event of its kind in mainland China. Hector Aristizaba, as well as Spanish community drama education expert Alessia Cartoni and other experts from Hong Kong, China, came to carry out a week of workshops and trainings.