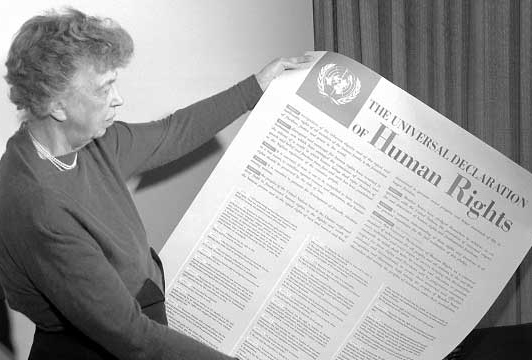 Eleanor Roosevelt with the Universal Declaration of Human Rights (November 1949).

Arriving in Paris amid intensive security, over 40,000 people are anticipated to attend the international climate summit this week and next. The attendees include 10,000 delegates from 195 countries, in addition to thousands of journalists, NGOs, scientists, and activists.

This will be the biggest diplomatic event to be held in France since the United Nations Declaration of Human Rights was signed here in 1948.  Following the atrocities of World War II, the Declaration was the first global definition of the rights to which all human beings are inherently entitled.

Dealing with climate change impacts also implicates human rights. That’s why a U.S. court in Washington State recently ruled in favor of a group of children who had sued the state for failing to protect them from climate emission-caused harms.

The judge agreed with the children’s assertion that the state has an obligation to protect natural resources—such as rivers and lakes and the atmosphere—because these resources are held for all in a “public trust.” The judge found that, “[the youths’] very survival depends upon the will of their elders to act now, decisively and unequivocally, to stem the tide of global warming…before doing so becomes first too costly and then too late.”

Pacific Environment will be in Paris to help make this connection between climate change and human rights. We’ll host a film festival that showcases the harm coal is causing to communities in several of the world’s most important coal-producing and consuming countries. These films, and the panel discussion following, will allow local leaders to bring their stories forward to the government delegates and the world.

Will the agreement reached in Paris this time make history, too?