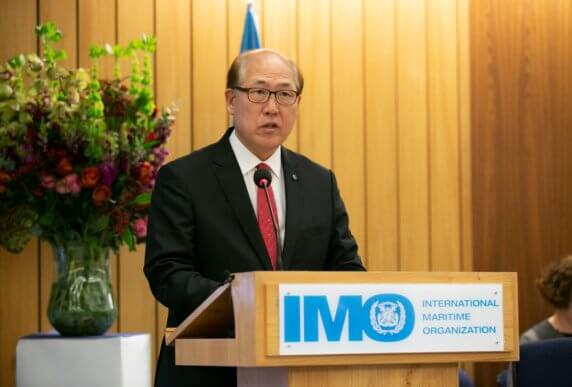 In this letter, six environmental groups – Pacific Environment, the Clean Shipping Coalition, EcoDes, EDF, Clima e Sociedade (iCS), and WWF – congratulate Kitack Lim on his election to a second term as the Secretary-General of the International Maritime Organization. They call on him to put all his efforts in 2020 into adopting effective global regulation to finally start tackling the shipping sector’s climate impact. The Secretary-General’s response is included below the letter.

We, the undersigned environmental organisations, would like to congratulate you on your appointment to a second term as Secretary General of the International Maritime Organisation. As the year of 2020 begins, we would like to share a few thoughts on the agenda for the forthcoming year, with a view to fostering effective climate action in the shipping sector.

As you have rightly pointed out a number of times during your first term, tackling shipping’s impact on the climate is the biggest challenge facing the sector today. During your first tenure, IMO adopted the Initial GHG Strategy recognizing the need for the sector to decarbonise. The much harder test now is putting policies in place to meet that goal and ensuring that decarbonisation happens on a time-frame consistent with keeping global temperature rise below 1.5 degrees, as established in the Paris Agreement.

Your renewed tenure runs to 2023. This is the date at which the IMO Initial Strategy and its goals will be reviewed, revised and most importantly, assessed on whether concrete policies to reduce shipping’s climate impact have been implemented. The IPCC special report on 1.5 degrees has shown that the decarbonisation of the fleet needs to be complete before 2050 and the level of ambition in the IMO’s GHG strategy must be adjusted accordingly.

Indeed, at the opening of the 31st IMO Assembly in which you were re-elected, you recognised that time is running out:

“But we must now accelerate progress towards the implementation of the initial strategy, looking at new fuels from renewable and sustainable sources, new methods of propulsion, and new ways of maximizing the efficiency of existing propulsion methods.”

Your call to accelerate progress reinforces the blunt urgency of your counterpart, UN Secretary- General António Guterres, who called for accelerated action at the recent Madrid climate talks stating:

“The point of no return is no longer over the horizon. It is in sight and hurtling toward us.”

“If we do not urgently change our way of life, we jeopardise life itself.”

As you stated, there is unfortunately no single solution that will solve shipping’s contribution to the climate crisis. This, coupled with the enormous gravity of the climate emergency, justifies regulatory actions at all levels, including by regions such as the European Union, by individual countries, and by ports. The IMO must work with all these disparate groups – not against them – to encourage complementary efforts and higher ambition. This will ensure that together the entire shipping sector becomes a trailblazer for climate action; a sector that can be considered a model of climate leadership.

It is important to acknowledge that solving the climate crisis for the shipping sector will not be easy. It will require some difficult choices for the industry. It will require the IMO and other organisations to step forward with innovative policies and importantly, and it will require visionary leadership from many, including you. But the reward will be huge. A stable climate for future generations and the avoidance of countless deaths (not least of seafarers), economic disruption, infrastructure damage and stranded assets from climate change effects across the world.

The IMO as an international regulator has a responsibility to act itself but can also help coordinate, share and drive the climate ambition of others. So, as you begin to set goals for your second term, we, on behalf of civil society, call on you to become a beacon for ambitious leadership on climate. The public has woken up to the danger, and actions taken in the next few years will be critical to ensure that the current course on emissions is reversed. We sincerely hope to be writing to you again at the end of your second term to congratulate you on a job well done for the environment.

The Secretly-General responded shortly after the letter was made public via the IMO twitter.

IMO Secretary-General Kitack Lim thanks environment NGOs for their open letter on climate change. “I share your concerns, I agree working together is vital and appreciate your support. We must accelerate our efforts. We have no time to waste and we cannot afford to fail.”