“The Wise Love Water”: A Day in the Life of a River Volunteer in China 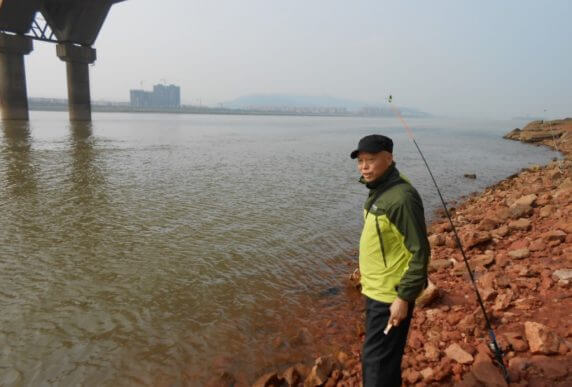 Yu Lixiang asked me to meet him on a sunny afternoon in March on the banks of the Xiang River. He waited for me by a bridge where he was making a routine stop to test the water quality of the Xiang River, the main freshwater artery flowing through China’s eastern Hunan Province.

The spot Yu Lixiang and I were exploring had been selected as a monitoring point because it is near one of Changsha’s municipal drinking water inlets, and water quality is threatened by industrial pollution sources upstream. Yu Lixiang has been to this spot dozens of times to check water quality, and local fishermen seem to know him, telling him in the local Changsha dialect about changes they have observed in the river day to day.

In his fifties, Yu Lixiang jumped lightly from rock to rock along the river bank as we started the monitoring process. After snapping a few photos of the river and its surroundings, he took out test strips from his waist bag to collect data on the pH of the river. “Today the pH, at this point along the Xiang River, is 6—not bad”, Yu Lixiang said. Then he carefully recorded the findings in his notebook. (Pure water has a pH very close to 7.)

Yu Lixiang is one of a growing number of citizens who participate in volunteer networks to help clean up China’s rivers. “Teacher Yu,” as Yu Lixiang is affectionately known by his fellow volunteers, is the leader of the Changsha city team in the network known as the “Xiang River Watch.”

The members of Xiang River Watch all share the same dream: that one day all rivers in Hunan Province can be cleaned up and protected. The network was founded by Pacific Environment’s partner Green Hunan three years ago to mobilize citizens from all walks of life to watchdog water pollution—a grave environmental threat in China.

Today, 92 volunteers participate in Xiang River Watch’s local teams to patrol the main stem and the eight major tributaries of the Xiang River every day. On average, the teams find and investigate eight pollution incidents per week.

Over the past three years, the Changsha city team alone has reported over 600 pollution violations on Weibo.com, a popular social networking site used by an increasing number of Chinese citizens to bring attention to environmental problems. Last year, Green Hunan and Xiang River Watch volunteers not only found and reported hundreds of polluters, they also successfully pushed for cleanup of over 30 individual pollution sources through closure of polluting factories or installments of new pollution control technologies.

In 2010, Yu Lixiang read about Green Hunan and Xiang River Watch in a newspaper and immediately decided to volunteer. He told me that his ancestors settled along the banks of the Xiang River hundreds of years ago. And  he pointed out that locals throughout water-rich southern China often call the great rivers that flow by their doors “Mother River,” and that’s how the Xiang River is known in this part of Hunan. Yu Lixiang traces his love of rivers back to his childhood. He was born by the Xiang River, his “Mother River,” and that’s why he feels a natural connection with the river. Standing by the river, he smiled as he quoted one of Confucius’s sayings to me, “The wise love water!”

When Yu Lixiang was young, he went swimming in the Xiang River every summer. At that time, the river was clean and beautiful. But in the 1990s—a time of economic boom throughout China—the river started to fill with trash and began to smell bad. That’s when Yu Lixiang had to give up swimming and started walking along the river instead.

Protecting the water and being close to the river was already his way of life, so it wasn’t surprising that he decided to join Green Hunan as a volunteer. “If there had been an environmental group earlier, I would have joined earlier,” he said.

But volunteer work is not without challenges for Yu Lixiang. Because most volunteers are much younger, he used to worry about fitting in. It also took him a while to become familiar with social media, which the volunteers use to publicize their pollution findings. But now he takes the lead in reporting his team’s results online.

Speaking about his team’s next challenges, Yu Lixiang told me about a new wastewater treatment plant being installed nearby. “I plan to push for better disclosure of information about its operations,” he said. Right now, 300,000 tons of wastewater are discharged into the Xiang River without treatment every day. Yu Lixiang believes that once the new treatment plant is in operation, it will take some close monitoring of the treated water to ensure that the water is actually pollution-free before it enters the Xiang River.

Yu Lixiang wants to inspire more people to join a river monitoring network and also to expand his own efforts; this summer, he plans to carry out field investigations at the headwaters of tributaries of the Xiang River. His personal dream is to one day go and see the famed Sanjiangyuan region, where China’s other great rivers—the Mekong, Yangtze, and Yellow—originate high in the Tibetan plateau.

Thanks to Yu Lixiang and many others like him, the Xiang River and other rivers throughout China are getting a second chance. Pacific Environment is helping grassroots environmental groups across China grow networks of citizen monitors that are ever more effective at stopping polluters and cleaning up rivers.