The Elephant in the Room in Paris 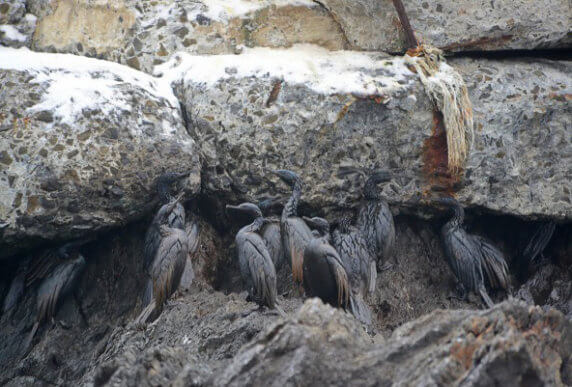 A Russian tanker stuck on a reef near Sakhalin Island in the Russian Far East is contaminating local wildlife and even affecting some Alaskan species.

It’s no small irony that many of the small island nations most at risk from rising sea levels such as the Marshall Islands are also some of the foremost countries for ship registries.

Called by some the “elephant in the room,” meaningful commitments to reduce emissions from shipping are critical to containing climate change.

Even the shipping industry is coming around. Just in advance of the Paris climate talks, many of the world’s top shippers issued a statement encouraging the International Maritime Organization to “act urgently in establishing the timely and progressive frameworks required that will deliver a carbon strategy which enables shipping to confidently and effectively play its part in achieving the UNFCCC global CO2 reduction targets.”

Current international rules are insufficient to reduce emissions enough to meet goals of fending off climate change. The shippers further found that, “Climate change is one of the biggest risks to the future of global trade and the shipping industry; the SSI believes that it is not commercially, environmentally or socially sustainable for the shipping industry to continue on a Business As Usual carbon emissions pathway.”

Far from the tropical island states, the Arctic is another region with heightened risk from shipping and climate change.

Just this week a Russian tanker ran aground and is now spilling oil into Arctic waters. The region’s governor has called it an “ecological disaster.”

Vanishing sea ice is making way for increased shipping in Arctic waters, including ships carrying oil. Pacific Environment is focused on creating both domestic and international rules to protect Arctic marine environments that are so crucial to local communities.

Earlier this year, the International Maritime Organization approved the Polar Code, putting many important rules in place, including prohibitions on dumping garbage and protections for whales and other marine mammals.

But, top threats to the Arctic remain unaddressed, including the risk for oil spills, which are nearly impossible to clean up in icy Arctic waters.

Heavy fuel oil was banned in Antarctic waters in 2010, but remains to be banned in Arctic waters. Pacific Environment is advocating that the U.S. Coast Guard and IMO create Arctic shipping measures that avoid and minimize dangers from oil spills, including a ban on heavy fuel oil and establishment of protected areas.