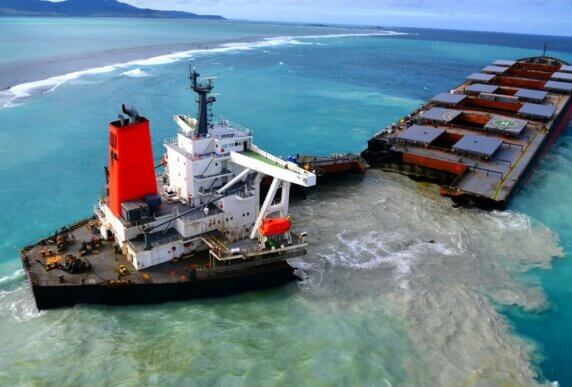 San Francisco, California – On August 6, 2020, a Japanese-owned, Panamanian registered deep sea bulk carrier MV Wakashio began leaking fuel oil off the small island state of Mauritius, sparking an environmental catastrophe. Pacific Environment’s team has since worked to mobilize public awareness and an urgent international response. As of August 12, a reported 1,000 tonnes of very low sulphur fuel oil (VLSFO) have spilled into the Indian Ocean. Thanks to the rapid deployment of salvors by France, the remaining fuel oil has been reportedly removed. The vessel has now split into two. Conservationists believe the oil spill has set Mauritius back two decades’ in terms of the time it will take to restore its natural wildlife.

“The MV Wakashio oil spill in Mauritius is a tragedy of the commons,” says Madeline Rose, Pacific Environment’s Climate Campaign Director. “Mauritians will suffer for a generation as the result of profit-driven decisions made by shipping companies in Japan and decades of rigged deal making between Big Oil and Big Shipping. This oil spill lays bare the inequities in today’s international shipping system and makes clear the urgent need to get ships off fossil fuels.”

Mauritius is not the only country suffering from the toxic mix of oil and oceans. Just days before the MV Wakashio spill began, a fuel oil spill was reported of the coast of Venezuela. Right now, a decaying oil tanker is idling off the coast of Yemen in the Red Sea, threatening destruction on par with what’s unfolding in Mauritius. Among Arctic nations, the risk of a catastrophic, ecologically destructive oil spill is a constant and increasing risk.

“The tragedy in Mauritius underscores the urgency of work underway at the International Maritime Organization both to ban the use and carriage of heavy fuel oil in the Arctic and to accelerate the shipping industry’s transition off fossil fuels,” says Jim Gamble, Arctic Program Director for Pacific Environment. “At any given time, over 50,000 massive fossil fueled ships are traversing our oceans, making fuel oil spills a constant risk. Like the Antarctic, policymakers should have banned heavy fuel oil in the Arctic years ago, and should be racing to get ships off fossil fuels globally today.”

Pacific Environment calls on the international community, including Japan and the ship’s flag-State of Panama, to rush support to Mauritius in order to minimize the spill’s impact on the Mauritian environment, wildlife, and the natural resources on which local communities depend. We urge an independent investigation of the spill, not led by the vessels flag state of Panama. We join our Japanese and Mauritian allies in demanding full compensation for the clean up by ship insurer, Japan P&I Club. We remind nations that adequate, binding regulations must be adopted on heavy fuel oil and operational carbon intensity at the International Maritime Organization’s next environmental meeting in November. Finally, we urge increased international responses to contain the spill off the coast of Venezuela and to prevent another tragic spill in the Red Sea or Arctic.