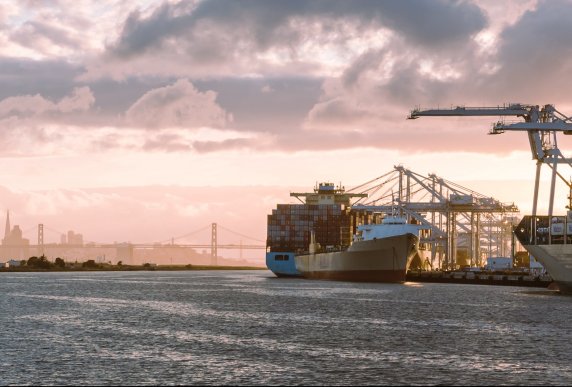 Cargo ships in the port of Oakland, California.

San Francisco, California. – Pacific Environment welcomes introduction of the landmark Ocean-Based Climate Solutions Act of 2020 in the U.S. House of Representatives today and commends its authors for focusing in on curbing ships’ climate emissions.

The shipping industry emits over 1 billion tons of carbon dioxide in addition to climate-warming super pollutants methane and black carbon, as well as conventional pollutants that harm human health. The industry has long dodged domestic environmental regulation and has benefited from largely voluntary, consensus-negotiated regulation brokered at the United Nations’ International Maritime Organization. In the face of the global climate and biodiversity emergency, nations around the world are rightly taking shipping’s climate emissions into their own hands.

“The shipping industry has evaded serious climate regulation in the United States for too long,” says Madeline Rose, Climate Campaign Director for Pacific Environment. “The Ocean-Based Climate Solutions Act of 2020 rightly focuses in on the imperative and the opportunity to curb ship pollution in U.S.-regulated waters to protect our ocean, port communities, and our planet.”

This summer, the International Maritime Organization affirmed in its Fourth Greenhouse Gas Strategy that 30% of shipping’s global greenhouse gas emissions occur within nationally regulated waters globally. This finding served as a clarion call to all nations to curb ship pollution in their own waters and, in so doing, catalyze the shipping industry’s long-overdue transition to clean energy. The Ocean-Based Climate Solutions Act in the U.S. rightly responds to this call to action.

The Ocean-Based Climate Solutions Act of 2020 would establish a greenhouse gas monitoring, reporting, and verification (MRV) system for the shipping industry, requiring that all vessels carrying a certain amount of tonnage measure and report on their climate emissions. The Act requires annual public reports from the MRV system to be produced, and sets up a federal “Quiet Seas and Clean Skies Program,” to incentivize voluntary “slow steaming” in U.S. ports and waters. “Slow steaming,” or the reducing of ship speed, is a simple operational tactic proven to reduce ships’ climate pollution: Reducing ship speeds by 20 percent can cut down a ship’s emissions by as much as a quarter. Slow steaming also reduces air pollution, noise pollution, and minimizes the risk of ships striking and killing marine mammals.

“It’s particularly important that the Ocean-Based Climate Solutions Act establishes a monitoring, reporting and verification system to accurately count ships’ carbon emissions in U.S. water and creates a voluntary slow steaming incentive system,” says Rose. “We recommend the slow steaming system be mandatory and that the MRV system be expanded to include ‘carbon dioxide equivalent emissions’ to make sure the U.S. monitors and manages other climate-warming emissions from ships, like methane. But the bill as written is an excellent start.”

The United States has a major role to play in catalyzing shipping’s clean energy transition and putting the shipping industry on a climate action pathway consistent with the planetary imperative of keeping global temperatures below 1.5 degrees Celsius above pre-industrial levels. The Ocean-Based Climate Solutions Act provides the foundations for this effort, and we commend its authors for their leadership.