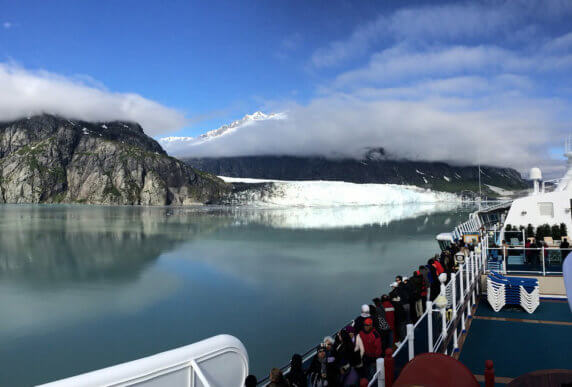 SAN FRANCISCO, CA — As Carnival Corporation’s first ships of the season arrive in the Arctic, an international coalition of environmental groups has joined together to call on the cruise giant to stop using one of the world’s cheapest and dirtiest fossil fuels—heavy fuel oil—on ships traveling in fragile Arctic and sub-Arctic waters.

July marks the beginning of Arctic cruise season, and the cruise ship Rotterdam has just arrived in the Arctic. Rotterdam is operated by Holland America, which is owned by Carnival. With cruises in this fragile ecosystem scheduled to grow in frequency, companies like Carnival must change their fuel source to stop destroying the very climates their passengers are going to see.

“Not only does Carnival’s use of heavy fuel oil increase global climate change impacts — the risk of an oil spill poses a major threat to Arctic wildlife and coastal communities. Worse still, heavy fuel oil is virtually impossible to clean up, particularly in cold and remote Arctic waters. It’s time for Carnival to move past meaningless talk of its climate values and actually end its reliance on the world’s dirtiest fossil fuel.”  -Karen Mahon, Strategy Director, Stand.earth

“Carnival’s burning of heavy fuel oil in their cruise ships is destroying the environment their customers are paying to see. It’s time the take their responsibility and switch to clean fuels.” -Lucy Gilliam, Aviation and Shipping Officer, Transport & Environment

Tourism provides the unique opportunity to experience the Arctic’s beauty firsthand. Cruise ship companies should not be using one of the dirtiest fuels on the planet, which threatens the Arctic marine environment and the Indigenous peoples that depend on it for their very way of life.” -Jim Gamble, Senior Arctic Program Officer, Pacific Environment

“A heavy fuel oil spill in the Arctic would wreak havoc on the wildlife and the indigenous communities who rely on those pristine waters. Cruise lines like Carnival must do their part to protect the environment we all share, and that means phasing out dangerous, polluting heavy fuel oil.” -Verner Wilson, Senior Oceans Campaigner, Friends of the Earth

By powering its ships with heavy fuel oil, Carnival is causing devastating effects to Arctic communities impacted by melting sea ice. When burned, heavy fuel oil releases greenhouse gases and other dangerous pollutants like sulfur dioxide and soot (or black carbon). In the Arctic and sub-Arctic, this soot settles on sea ice, rapidly accelerating its melting. The sea ice loss is devastating for Arctic wildlife and is heavily impacting Arctic communities.

The coalition is calling on Carnival to:

The “Clean Up Carnival” campaign is led by Stand.earth, Pacific Environment and Friends of the Earth in the U.S. and Transport & Environment in Europe.

The petition is at cleanupcarnival.com and will be delivered to Carnival Corporation CEO Arnold Donald at the company’s headquarters.