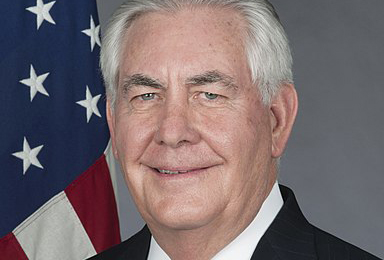 WASHINGTON DC — A broad coalition of more than 50 national organizations — including groups focused on foreign policy, civil rights, climate, human rights, faith, labor, development and transparency issues — sent a letter to the Senate Foreign Relations Committee urging it to reject ExxonMobil CEO Rex Tillerson’s nomination to be the next Secretary of State.

Because of Mr. Tillerson’s lifelong career working for ExxonMobil, questionable ties to foreign corporations and government officials whose interests and values often conflict with those of the United States, these organizations believe that Mr. Tillerson falls well short of the high standards required to be our nation’s top diplomat.

“We still question whether Tillerson might have a financial interest in Exxon,” said David Arkush, managing director of Public Citizen’s Climate Program. “But even if that’s resolved, ethics rules also aim to eliminate the appearance of a conflict of interest, and it would take a real magician to make Tillerson’s apparent conflict disappear. He’s spent his entire career working for Exxon, and his statements show he often thinks what’s good for Exxon is good for the country. There’s no reason to take a chance on a Secretary of State who might not be able to tell the difference between serving the American public and lining the pockets of his cronies.”

“We won’t allow our climate diplomacy to be in the hands of a dinosaur like Rex Tillerson,” said 350.org Executive Director May Boeve. “By tapping Rex Tillerson as Secretary of State, Donald Trump is essentially declaring war on our planet and betting against a livable future. Tillerson would undoubtedly prioritize Exxon and its ilk above the well-being of the American people. The fight to reject Rex and Trump’s climate denial cabinet is only the beginning.”

“Rex Tillerson has spent his entire career working on behalf of ExxonMobil’s global conglomerate at the expense of American values abroad,” said Global Progressive Hub Co-Director Michelle Dixon. “The fact that Mr. Tillerson regularly ignored gross corruption and human rights violations in countries like Equatorial Guinea, Angola and Chad so that ExxonMobil could rake in oil profits, should disqualify him to be the face of American diplomacy.”

“As the country’s Chief Diplomat, Tillerson would lead the U.S. delegation in the international climate negotiations – a process his new boss consistently threatened to withdraw from throughout his presidential campaign. Millions of people around the world are already seeing the devastating impacts of climate-induced floods, droughts, and extreme weather,” said Brandon Wu, ActionAid USA Senior Policy Analyst. “They need the United States to live up to and go well beyond the climate commitments we have made at the UN. Tillerson has a history of funding climate science denial and has a massive stake in ensuring international climate action is as slow as possible, which will result in displacement and even death for countless people in poor countries. These conflicts of interest make him ill-suited for the office of Secretary of State.”

Stephen Miles, Director of Win Without War, said, “There is no excuse for the American public to ever have to question whether our chief diplomat is putting the nation’s interests first or those of the only company he has ever worked for. Unfortunately, that’s exactly the situation we will find ourselves in every time Rex Tillerson sits down at the negotiating table.”

“The natural world is roaring its testimony — burning fossil fuels is warming our climate, hurting all of us,” says Joelle Novey, who directs Interfaith Power & Light (DC.MD.NoVA), one of a network of faith-based climate organizations nationally. “The climate crisis is urgent, and we can’t afford to have leaders who aren’t listening to what Creation is telling us. In today’s world, a climate denier can’t keep us safe.”

“The global community shuddered with horror when President-elect Donald Trump nominated Rex Tillerson for Secretary of State,” said Tamar Lawrence-Samuel, international policy director with Corporate Accountability International. “If confirmed, he would run the Department of State like an extension of ExxonMobil’s business development arm, padding corporate America’s pockets along the way at the cost of people, peace, and the planet.”

“We live in the United States of America, not the United States of Exxon,” said Center for Biological Diversity senior counsel Bill Snape.  “Tillerson’s illegal and unethical behavior in places like Syria and Iran, not to mention his cozy relationship with Dictator Putin, make him a completely wrong and inappropriate choice to be Secretary of State.”

The full text of the letter and list of signers is below.
###
For further comment, questions, or to discuss the broader campaign opposing Rex Tillerson’s confirmation as the next Secretary of State – please feel free to contact Ben Armbruster, Global Progressive Hub’s Communications Director, at [email protected] or 202-247-7133, or Stephen Miles, Win Without War’s Director, at [email protected] or 504-289-3594.

We are writing you with deep concern about the nomination of ExxonMobil CEO Rex Tillerson for Secretary of State. While we understand that the President-elect chooses a Cabinet, the Constitution clearly vests the Senate with an appropriate check to ensure that key appointees meet the highest standards.

Mr. Tillerson’s nomination raises deep and unanswered concerns regarding corporate influence over the government, personal conflicts of interest, and questionable ties to foreign governments and officials.

While hearings should address these concerns, given Mr. Tillerson’s known corporate record and his extensive ties to ExxonMobil and other corporations and foreign governments whose interests and values often conflict with those of the United States, we believe he does not meet the standards required of a Secretary of State.

Under Mr. Tillerson’s leadership, ExxonMobil has worked in opposition to U.S. interests abroad and ignored gross rights violations in Russia and other countries ruled by oligarchical and despotic regimes, in order to fill its oversized coffers and continue polluting our planet.

For example, under Mr. Tillerson’s leadership, ExxonMobil has made billions in Equatorial Guinea – a country with one of the worst corruption and human rights records. Rights groups have accused Exxon’s presence there of helping to prop up the dictatorship of President Teodoro Obiang, who has been in power for more than three decades.

Of particular concern are Mr. Tillerson’s close personal ties to Russian President Vladimir Putin and other senior Russian officials and businessmen. These connections are deeply troubling, particularly given recent allegations that Russia attempted to interfere in the 2016 U.S. presidential election on behalf of the President-elect.

Mr. Tillerson ties to Russia have not only benefited himself financially, they have often run directly counter to American interests and well-established foreign policy positions. Two years after Putin awarded Mr. Tillerson with the Kremlin’s Order of Friendship decoration, Mr. Tillerson personally lobbied the White House regarding sanctions imposed on Russia for its 2014 invasion of Ukraine, saying at the time that ExxonMobil’s skepticism of them was being heard “at the highest levels.” What’s more, ExxonMobil lobbyists, with Mr. Tillerson as CEO, successfully helped block a bill that would have made it more difficult to roll those sanctions back under the next administration. If confirmed, he will be a key voice in determining whether these sanctions are upheld, and whether ExxonMobil will once again gain access to oil fields that will generate hundreds of billions of dollars in returns.

Mr. Tillerson’s close ties to ExxonMobil – regardless of how far he distances himself from the oil giant – raise serious questions about whether his actions on the world stage will serve the interests of himself and ExxonMobil, or the American people. Likewise, his forty-one-year tenure there, including 10 years as its top executive, raises the question as to whether he has internalized the company’s values and interests so deeply that he is unable to shed them in favor of those of the United States.

Moreover, ExxonMobil is currently under investigation over accusations that, while Mr. Tillerson was CEO, it knowingly downplayed the risks of manmade climate change to the public and investors. Despite Mr. Tillerson’s statements that the threat from climate change is “real” and “serious,” he has also regularly spread misinformation on the issue, and under his leadership, ExxonMobil continued to fund climate science denial.

The next Secretary of State will be on the front lines of a host of national security and foreign policy issues for which Mr. Tillerson has no known position. To date, the American public has no knowledge of how the man who wants to be our chief diplomat would engage on crises ranging from Syria, Iraq, and an assertive China, to the erratic actions of a nuclear North Korea and numerous diplomatic challenges throughout the world. While we hope that Mr. Tillerson’s Senate hearings and written answers to questions for the record will supply some of this information, it is a stark departure from past practice to have a Secretary of State with so few publicly known positions on such key issues.

Our nation’s top diplomat must safeguard U.S. interests, promote American values, and protect and defend the rights of all people, regardless of nationality, race, gender, ethnicity, or sexual orientation. Mr. Tillerson’s record demonstrates the opposite inclinations. At ExxonMobil, he has partnered with despots and human rights violators, and he has repeatedly acted against the interests of the United States. In short, the available evidence provides no basis to conclude that Mr. Tillerson will promote or safeguard U.S. interests and values, and it supplies overwhelming cause for skepticism.

We urge you to reject his nomination.
Sincerely,
350.org

Do the Most Good Montgomery County

The Center for Media and Democracy