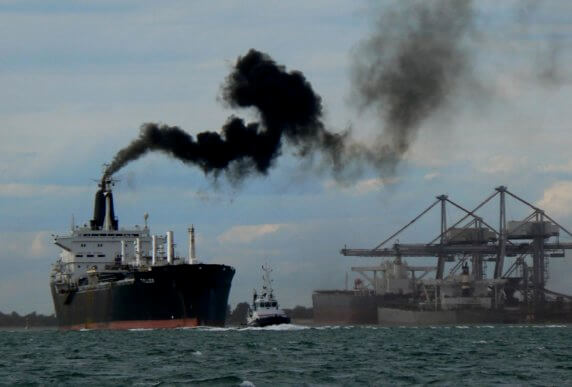 The meetings were held in part due to pressure from Pacific Environment and allies  urging that the world cannot allow the COVID-19 crisis to exacerbate the climate crisis. Good technical progress made this week reveals that the short-term measure that Pacific Environment has long advocated for—a mandatory and appropriately ambitious carbon intensity requirement—must be included in the IMO’s amended Greenhouse Gas Reduction Strategy.

Reducing greenhouse gas emissions from the shipping sector is even more critical now as the world is rapidly exhausting its carbon budget to keep global warming below the Paris Climate Agreement’s 1.5C goal. The full letter is below.

SUMMARY: Good technical progress made this week revealed that a properly enforced goal-based Operational Efficiency measure would unlock net savings for the shipping industry, as well as reducing CO2 emissions, and so looks increasingly inevitable.

We, the undersigned environmental organizations, thank the International Maritime Organization (IMO) for hosting a round of virtual informal talks on greenhouse gas reduction this week.

After the necessary decision to postpone the 75th meeting of the IMO’s Marine Environment Protection Committee (MEPC) earlier this year, given the global imperative to contain the COVID-19 pandemic, we are grateful that the IMO listened to requests from our own organisations, and many countries, to maintain momentum in critical intergovernmental discussions on how best to address shipping’s contribution to the climate crisis.

With appropriate timing, during this week’s talks the World Meteorological Organisation said it sees an increasing chance of global warming surpassing the 1.5C degrees threshold within the next five years, highlighting the urgency of reducing greenhouse gas (GHG) emissions in the short term.

Given this context, we welcome the progress made in the following seven areas:

1) The clear message from some Small Island Developing States (SIDS), and several other countries, that the IMO must achieve absolute GHG emissions reduction over the next decade consistent with staying within 1.5C degrees of global temperature rise, to meet countries’ existing Paris Agreement commitments.

2) Broad acknowledgement by country delegates that technical measures, such as the Energy Efficiency Existing Ship Index (EEXI) proposal, on their own, are not consistent with the Paris Agreement goals already committed to by most IMO member states. Even some of the strongest backers of EEXI now acknowledge they are not proposing this measure in isolation, but that it should be complemented with an Operational Efficiency measure.

3) Countries coalescing around the need for enforcement of a goal-based Operational Efficiency measure, through mandated Carbon Intensity rules. Most countries now understand that if a Short-Term Measure is mandatory in name only, and CO2 reduction by each ship still remains optional, this would damage the reputation of the IMO and the industry itself.

4) Acknowledgement of the crucial work of Impact Assessments, and a proposed clear way forward to ensure that this work does not need to delay necessary climate action.

5) A greater awareness among delegates that the IMO’s preliminary “at least 40%” Carbon Intensity improvement by 2030 goal would allow for shipping’s absolute CO2 emissions to be higher in 2030 than the 2008 baseline. There was also some acknowledgement that having sectoral emissions in 2030, even at the same level as 2008, would be increasingly hard to justify to the public, and that only substantial outright emissions reduction before 2030 will fulfill shipping’s contribution to the Paris Agreement.

6) The need for transparent trade cost data to be made public by shipping companies, industry associations, and national governments, in order to allow robust Impact Assessments on Short-Term Measures to be done in a timely manner.

7) The evidence shared by several countries that the shipping industry’s operations are currently sub-optimal from an efficiency standpoint. These presentations revealed that not only would Operational Efficiency regulation save shipowners money, net (reduced fuel costs outpacing costs from extra days at sea), but also that extending the level of ambition of Carbon Intensity reduction far beyond the current IMO 2030 target would save shipowners even more money. Consultants arguing that maintaining inefficient shipping routes is in the best interests of developing countries must now re-examine the evidence for this claim.

Lastly, on the operational challenge of holding virtual meetings, we note that this week’s talks were in many ways a success. We therefore reiterate our call for both MEPC 75 and MEPC 76 to be held as soon as practical, and within this year if at all possible, if necessary in a virtual or hybrid format.

We do however urge the IMO to ultimately choose working arrangements with sensitivity to the needs of developing countries and particularly SIDS and LDCs (Least Developed Countries), provide urgent technical support where necessary, and arrange time-zones for virtual calls fairly to all countries, including in the Pacific region. Limiting the number of hours of meetings each day might be a solution, as well as extending an ISWG or MEPC over 2-3 weeks to give time for all items.