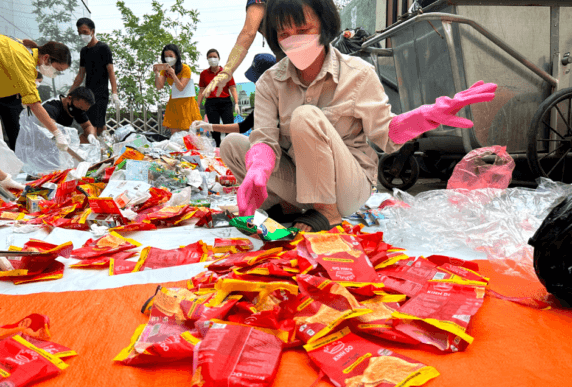 My proudest moment last winter was when allies and I were able to thwart attempts by multinational companies to avoid responsibility for plastic pollution in communities and our oceans.

We had just convinced top national policymakers to include strong provisions to curb plastic pollution in a new version of Vietnam’s environmental laws. These included single-use plastic bans and regulations that make polluters pay for the plastic waste they produce (known as Expanded Producer Responsibility or “EPR”).

As we were negotiating the detailed rules for how to make sure that plastic polluters pay, multinationals like Nestlé, Unilever and chewing gum maker Wrigley tried to dodge responsibility completely or kick the can further down the road.

The staff of the national ministry of the environment much appreciated our NGO coalition’s spirited defense of the new implementation framework and it successfully took effect earlier this year.

Going up against well-resourced corporations is not easy. But I know that my work is critical because unless we change how companies package their products, they will keep on polluting.

I first woke up to the problem of plastic pollution in 2017 when I returned home to visit family in the countryside. I saw a lot of waste in the road and the field, plastic in particular. It was so disheartening.

My starting point was my experience with people at home and in the community who didn’t really understand how harmful it is to have waste in the environment, or how to sort their household waste to dispose of it properly.

But I quickly realized that better waste management, while important, would not solve the problem.

I had to figure out how to engage the plastic producers, packaging companies and retailers who produce larger and larger amounts of single-use plastics every year. When I was looking for allies, there was no organized network of NGOs working alongside the government to strategize efforts to curb plastic pollution.

So I stepped up to take a leading role and — with the support of like-minded individuals from other organizations — we organized ourselves into the Vietnam Zero Waste Alliance (VZWA).

Since then, we have successfully contributed to helping the Vietnamese government institute an EPR system that makes plastic polluters pay for the waste they produce. We have also helped inspire the government to adopt single-use plastic bans at supermarkets, commercial centers, hotels, and tourism centers starting in 2025, and a national plastic bag ban that will take effect in 2026. And we have helped the government commit to creating a national action plan that will outline how every single sector can reduce its use of plastic over the coming years.

Together, we have achieved so much. But our work is far from done. Make a gift today to help me advocate new laws and regulations that will help stop plastic pollution at the source.

In 2023, I will spend much of my time working with allies to help create regional and national action plans that rapidly phase out single-use plastics.

Another project I’m especially thrilled to embark on is helping the Vietnamese government support strong measures to end plastic pollution in the negotiations for a Global Plastics Treaty.

Many people don’t realize that my country has some very ambitious plastic laws on the books. I’ll be proud to do my part to bring this ambition to the international community and make sure this global treaty will help end plastic pollution as quickly as possible — for people and the planet.

P.S: Check this link for some great coverage of the work my team and I are leading to build a zero-waste movement in schools across Vietnam