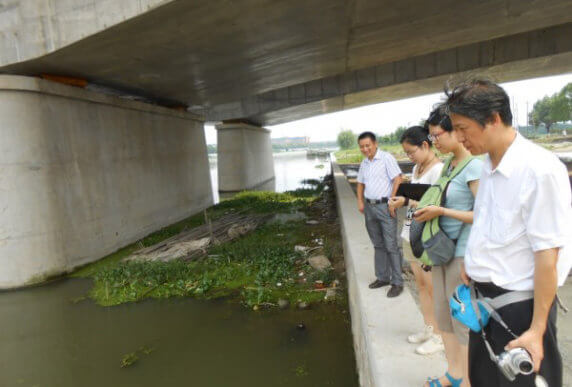 The ”Green Neighbors” program, which sheds light on the operations of industrial parks in the Nanjing metropolitan area, grew out of Green Stone’s volunteer monitoring network investigating industrial pollution throughout Jiangsu Province.

When a mine leaks heavy metals into drinking water supply in China, or when school children fall sick due to contaminated soil, or when a factory exceeds its pollution permits for the 79th day in a row, whose job is it to respond?

Technically, these kinds of problems are the responsibility of China’s environmental enforcement arm: local Environmental Protection Bureaus (EPBs). Working from the provincial level down to towns, environmental officials have a robust toolkit of environmental laws and regulations to assist them in controlling pollution.

But practically speaking, they don’t have sufficient organizational strength or reach to deal with every issue that arises. Often local environmental groups are the first responders to a pollution crisis in China, and increasingly, these groups also play a role in ensuring problems don’t occur in the first place.

Take for example the issue of industrial parks. These mega-complexes have cropped up all over China in the past decade, in an attempt to keep industries out of residential zones. Two years ago, the local environmental group Green Stone (based in Nanjing, Jiangsu Province) realized that these industrial parks, far from better managing pollution problems, were merely concentrating pollutants and creating shields behind which industries could ignore pollution treatment regulations.

Green Stone launched its “Green Neighbors” program to shed light on the operations of industrial parks in the Nanjing metropolitan area, a region that produces many highly-polluting goods, such as furniture polishes, dyes and paints, electronics, and industrial chemicals. Green Stone started meeting with industrial park representatives together with EPB officials, using these forums to discuss the legal requirements around pollution information disclosure and public participation.

This year, Green Stone brought local citizens to the round-table discussions as well, resulting in one industrial park—well-known locally for the noxious odors it emits when producing the carcinogenic petrochemical alkyl benzene—agreeing to regularly disclose pollution data and allow a community committee to regularly monitor its operations.

Green Stone is now planning to expand its Green Neighbors program to other communities it serves, and it plans to share lessons learned from these efforts with other grassroots groups in China.

Green Stone’s Green Neighbors program is a great example of how public engagement allow industries and community members to work together to resolve pollution problems. Not only do communities need venues through which they can raise health and safety concerns, industries and government actors are often better served by hearing those concerns than turning a blind eye to community needs.

Recognizing these benefits, the public’s right to participate in environmental decision-making is now firmly enshrined in China’s environmental laws and regulations.

Last month, Pacific Environment headed to China’s northeast to host its annual training and networking meeting for grassroots environmental groups from across the country. We met in a karaoke hall in a place called Mountain River Village, a cluster of brick homes and guesthouses interspersed between rows of corn and vegetables and surrounded by boreal forest.

This year’s trainings, role plays, and planning discussions all revolved around the topic of public participation in environmental decision making and how to take advantage of the new policy space opening up for grassroots environmental groups.

To prepare groups to take better advantage of the opportunity presented by environmental hearings, we organized a mock hearing focusing on whether a local EPB should issue a new pollution permit to a factory that had repeatedly violated its pollution permits in the past. As the hearing reached its climax, the team portraying the local EPB criticized a pollution monitoring report introduced by the team portraying a local environmental group. “Where does your data come from?!” they shouted, “And why is this the first time we are seeing your report?!”

Meanwhile, the team portraying representatives from a local village started arguing amongst themselves, when one representative revealed she had accepted a color TV from the factory boss as a gift. As a real hearing might, our mock hearing ended without an actual decision on the permit, but we counted it as a successful learning exercise for these local environmental leaders who want to participate more meaningfully in pollution permitting and other decision processes.

Local environmental groups must prepare themselves well by forging strong ties with communities impacted by pollution, and also EPBs, often the primary audience they are trying to influence. Formal hearings are one promising avenue to exert such influence, but there is growing space to experiment with other methods as well.

So while some local groups like Green Stone are organizing multi-party discussion forums focused on specific pollution issues, other local groups using their influence to shape better environmental policies—a sphere that has traditionally been left to Beijing-based organizations and academics.

For example, Green Hunan (from Changsha, Hunan Province) recently collected feedback from local community members and other local environmental groups from across China on a recent draft of a national water pollution regulation. They compiled the feedback into a set of recommendations, such as ensuring that the new law upholds the same public participation and information disclosure language as the progressive Environmental Protection Law that came into force January 1, 2015.

The group hopes to engage in similar policy efforts in the future. “Green Hunan has had many on-the-ground successes on individual pollution cases,” a staff member explained, “and we want to do more to share our grassroots perspective in environmental policy discussions.”

Pacific Environment is proud to support the work of pioneering local environmental groups such as Green Hunan and Green Stone through our ongoing support program and our recently launched public participation initiative. We look forward to sharing further updates about how these groups and others are innovating in ways that help local communities contribute to positive environmental change.