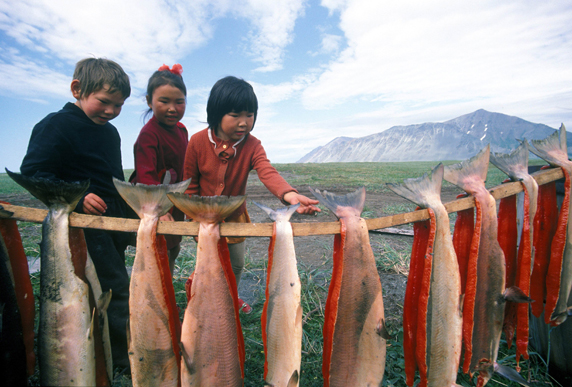 Back in January, I was asked to present on the topic of food sovereignty and climate change for the International Funders for Indigenous Peoples conference. As I was mulling over what to say, it dawned on me that most issues and threats that indigenous communities are facing today are quite similar, regardless of where they live. Indigenous peoples all over the world have to deal with the fallout from climate change, land grabbing, pollution, and encroaching industrialization.

The regions where I work – Siberia, the Russian Far East, and the Russian Arctic – are areas where people live in very harsh climate conditions and their food systems are perfectly adapted to their environment. Native peoples in the North have access to healthy and culturally appropriate food produced through ecologically sound and sustainable methods. They obtain their food from nature by foraging, collecting roots and berries, catching fish, and harvesting animals.

A couple of years ago I learned an important lesson about the connection between food and indigenous cultures when I was invited to have dinner with an Inupiat family in Nome, Alaska. That evening I tried my first walrus, whale, and caribou, and I listened to stories about the lives and history of the Inupiat people.

The Pacific walrus, along with many other food sources, is threatened by increasing Arctic development and climate change, which is melting  Arctic ice and destroying walrus habitat. Sadly, the loss of traditional food sources is already a reality for indigenous communities in the Arctic. That’s why we work to raise awareness that the Arctic is not just a treasure trove of natural resources waiting to be exploited by corporations like Shell Oil. It’s a region where indigenous peoples have created thriving subsistence lifestyles that depend on intact local ecosystems and healthy wildlife.

I believe that indigenous communities deserve to thrive, not just barely survive as melting Arctic ice and resource extraction projects destroy their homes and local food systems. That’s why Pacific Environment works closely with Native communities in the Russian and Alaskan Arctic to protect Native food sources and cultural traditions from the threats of climate change and industrial development.