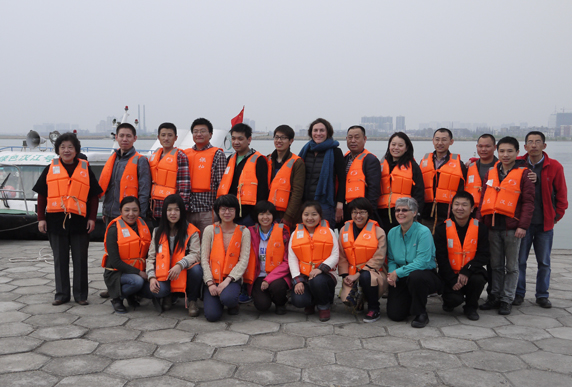 Our partners toured the Han River on Green Hanjiang’s Riverkeeper Boat to learn how grassroots activism has helped protect the river from industrial pollution.

Air pollution is strongly linked to premature death in China. According to a study by the World Health Organization, it contributed to some 1.2 million deaths in 2010. The country’s top officials have pledged to declare a war on smog. Yet coal, the main culprit in this tragedy, still rules China’s energy sector.

In March 2014, we invited a group of local environmental organizations to a training that kicks off our new project to address coal pollution in China. The event, co-hosted by Waterkeeper Alliance and Green Hanjiang, was the first in a series of workshops that will help local activists reduce reliance on dirty energy and improve air quality in their communities.


We gathered in Xiangyang, a mid-sized city in western Hubei Province on the banks of the Han River. Like most cities in China, Xiangyang is covered by a grey haze of pollution most days of the year. But unlike in most cities, the river that flows through the heart of Xiangyang is actually safe for fishing and swimming. This is partly due to the event’s co-host Green Hanjiang, which has been working with city residents to stop water pollution for more than 10 years.

Grassroots environmental groups like Green Hanjiang have come a long way. Only 10 years ago, the few local groups that existed mainly focused on education about the environment. Now, hundreds of local groups do hands-on work that cleans up industrial pollution and improves government enforcement of China’s environmental laws.

While Pacific Environment’s partners on the ground in China are excelling at stopping industrial polluters in their cities, few of them are actively challenging pollution caused by the energy sector. As the public’s concern about air pollution in China grows, citizens need to begin to connect the dots between dirty air and coal. Our meeting helped close this information gap and provided participants with hard facts on coal’s harmful impacts on water quality, air quality, and people’s health.

Our workshop also demonstrated how China’s current energy policies support increased expansion in coal mining and processing. And we highlighted the heavy price the country and its people pay for its continued reliance on coal as a major source of energy: rising amounts of dangerous toxins in water and air that harm people, wildlife, and ecosystems.

The harmful impacts of coal are indisputable. But how to decrease China’s reliance on coal is a more complex issue. Groups like NRDC have focused on pushing for a national coal cap, while other groups, including Greenpeace, have sought to mobilize public opinion against coal and work with Beijing policy makers to highlight the natural limitations to coal industry growth—like limitations on water resources needed to process coal in many of the planned coal base regions. Beijing’s Institute for Public and Environmental Affairs, meanwhile, is targeting one of the biggest consumers of coal—the cement industry in China—which produces over half of the world’s cement and accounts for some 30% of China’s industrial emissions.

Developing winning strategies at the local level is a key task for Pacific Environment and our partners, and the Xiangyang meeting was a critical first step in this process. Our effort will complement national policy efforts by ensuring that local environmental groups are able to enforce in their communities existing clean air policies and other top-down directives coming from Beijing.

We already fight industrial water pollution very successfully, and together with our partners we can also help reduce air pollution across cities in China and decrease the country’s overall reliance on coal for its energy needs.