25 Years Later: Did We Learn Anything from the Exxon Valdez Oil Spill? 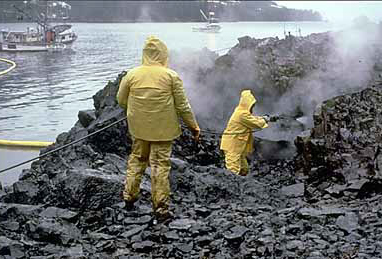 This year’s traditional Iditarod dog sled race began, as usual, with great excitement along the snowy streets of my hometown, Anchorage, Alaska. Dogs yelped and cried, straining their harnesses, eager to leap into the air and run. Meanwhile, we Alaskans, dressed in bright, traditional parkas, were packed tightly on the sidewalks surrounding the staging areas. But there was another presence in the crowd—a sea of people carrying bags emblazoned in red with the words “ExxonMobil” and handing out promotional tchotchkes.

We were celebrating this Iditarod a few weeks before the 25th anniversary of one of the greatest environmental disasters of all time: the Exxon Valdez oil spill. This was one of the biggest oil disasters in history and spilled over 11 million gallons of crude oil into Alaska’s pristine Prince William Sound—covering 1,300 miles of coastline and 11,000 square miles of ocean. It wiped out sea otter populations, a unique pod of killer whales, entire herring and crab populations, and tens of thousands of birds.

Watching Exxon’s commercial fanfare at this year’s Iditarod, I could not help but think, “Are we all gripped by collective amnesia?”  How could we forget that after creating the disaster in the first place, Exxon compounded the damage by spraying tons of deadly chemicals along our beaches to break up the oil? (Coincidentally, the company also produced these chemical dispersants and profited heavily from using them in its “clean up.”) How could we not remember that Exxon then went to the courts to avoid paying compensation and damages to fishermen and communities who suffered greatly from the loss of livelihoods and subsistence resources? Using a popular tactic from the corporate playbook, Exxon made sure that the lawsuits dragged on for so long that many of the fishermen died before ever receiving a dime.

Today, oil can still be found on some of Prince Williams Sound’s beaches, and some critical fish and wildlife populations have not yet recovered—and may never recover. But if nothing else, at least now the region and its people are better prepared to minimize, though not eliminate, the risks posed by shipping crude oil through this unique, and extremely fragile, marine environment.

Sadly, the same can’t be said for oil companies planning to drill for oil in Arctic waters or commercial ships traveling through the Arctic.

Last year, Shell’s foray into Arctic exploratory drilling was a disaster. The company breached numerous environmental, health, and safety regulations. And eventually, a federal court decided that Shell’s permits were granted prematurely and illegally. Ridiculously, the company publicly blamed its woes largely on “the weather”—not its incompetence.

Still, Shell does have a point when it talks about the weather. The Arctic presents oil drillers with severe weather problems that include extreme cold temperatures and thick ice slabs that can crush vessels and damage or sink platforms. In addition, during certain times of the year, vast cyclones rage across the region, creating a perfect storm for the loss of lives and potential oil spill disasters—the likes of which we have never seen, and hopefully never will see.

The Arctic Council, an intergovernmental forum comprised of the world’s eight Arctic nations, explicitly stated that the biggest threat to the Arctic is an oil spill similar to the Exxon Valdez disaster because water currents would carry the oil above and below the ice across vast distances. This could ultimately result in a total ecosystem collapse because the Arctic, while bountiful in marine life and nutrients, is home to fewer species than oceans further south. Predator species often rely on only one or two prey species for survival, so if one species is wiped out, the entire ecological chain could unravel. The Arctic truly is one of the most vulnerable places on our planet.

Perhaps in the future measures will be developed that reduce the risks oil poses to the fragile Arctic. Vessels may be required to operate on lighter fuels that simply evaporate instead of heavy fuel oil, which tends to persist in the environment. The oil and shipping industry may develop new technologies to minimize risk.

But today an oil spill would still threaten the very survival of the Arctic. And if we don’t admit this, then we have not learned a thing from the Exxon Valdez disaster.