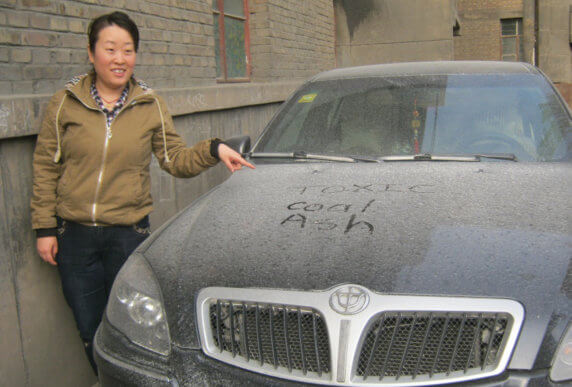 On April 3, 2013, I met two girls playing outside their rural home in the Xigu District near Lanzhou, in Gansu Province, China. Like most kids, they were playful and full of laughter, but unlike most kids, these girls are only allowed to play outside for a limited time every day. I traveled to Xigu to learn more about the harmful effects of the Xigu Thermal Power Plant, a coal-fired power plant that towers over this community. The children that I met went to school 200 feet away from the plant and are exposed to air pollutants every day because the power plant’s towering smokestacks stand amid residential buildings and farmland.

I traveled with two colleagues at the Waterkeeper Alliance, who we are working with to engage grassroots environmental groups in China on a national campaign to bring awareness to the dangers of coal power. We were also traveling with Green Camel Bell, our partner in the region, whose staff is just beginning to understand the implications of coal power on the water pollution issues that they work on.

Xigu Thermal Power Plant is over 50 years old. It was built in 1957 as part of China’s first Five Year Plan. The capital city of Gansu Province, Lanzhou, gets its power and winter heating from the plant, but residents also suffer greatly under the weight of its toxic emissions. According to the data from the Ministry of Environmental Protection, the average daily Lanzhou Air Pollution Index (API) is 223, which ranks its air pollution among the worst in the nation.

The years of heavy pollution caused extremely high cancer mortality rates; in Lanzhou the rate is 56.02% higher than the national average, and the city has the highest incidence of lung cancer in China.

As bad as this seems, the environmental situation today is actually not as bad as it was during the region’s most intensive development period, 30 years ago. On our field trip to Xigu, we met a 60-year old retired plant worker at the gate of the primary school. He told us “In 70’s and 80’s the pollution was much more serious, the smoke was black and the coal conveyor belt had no cover.” He recalled, “When the wind blew, coal ashes were everywhere.”

He also told us that in 1989 the air pollution was so bad nearby farmers were unable to harvest their crops. The farmers fought for compensation, and they won a small settlement, and some environmental safety equipment was installed. The retired plant worker also mentioned that some of his former coworkers at the plant now suffer from cancer, and there has never been compensation for the grave health problems the workers have suffered.

During our trip we spoke with community members who were naturally very aware of the soot spewing from the plant and hovering over their homes. However, few were aware of the very serious health impacts that accompany that soot. We spoke with the mothers of the two girls playing outside, who complained to us, “Our children have to change their dirty clothes every day…and the ash is very hard to wash out.”

But even if coal ash can be washed off the surface, this kind of daily exposure has long term health impacts that we can no longer afford to ignore.

In our campaign with the Waterkeeper Alliance we will be working with our partners to shine a spotlight on coal’s health impacts in China.