What I’m Fighting for in the Arctic 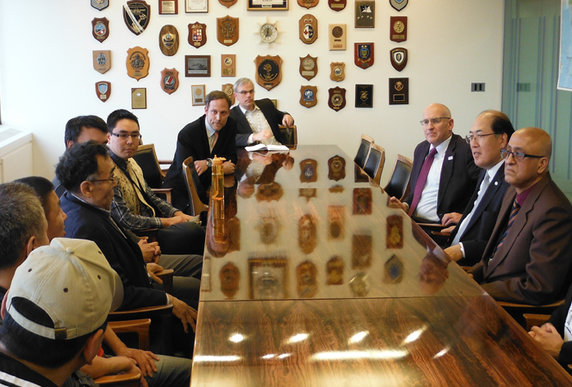 In this picture I’m wearing the sealskin vest my grandmother made (I’m the sixth person on the left). I was one of six Arctic indigenous leaders who helped convince international policy makers that it’s time to take action against a toxic fuel oil that threatens ocean life.

One of my most cherished gifts given to me is a beautiful sealskin vest made by my grandmother.

She was from St. Lawrence Island in the northern Bering Sea between Russia and Alaska. There, life continues to be sustained by our traditions of subsistence, with blessed wildlife that has nourished our people for thousands of years. We have an abundance of walrus, seals, whales, and other marine life.

I grew up in Bristol Bay in southwest Alaska— over 500 miles away from St. Lawrence Island— where the communities also live off the sea, including the world’s largest remaining run of wild sockeye salmon.

These two pieces of my family are far apart, but they have something important in common. We are joined by our ancestral dependence on the fish, birds, and marine mammals which migrate freely between the Arctic Ocean and Bering Sea.

To us, our ocean is our garden.

So, I made a special point of wearing my vest when traveling to London to discuss rules for shipping in the Arctic at the U.N.’s International Maritime Organization and the need for Arctic indigenous peoples to have a seat at the table as these rules are being made.

I would like to thank Pacific Environment and its partners for reaching out to me and other indigenous Arctic leaders and help us gain entry and first-hand experience in the world of international shipping law.

With Pacific Environment’s assistance, I have been able to attend several sessions of the International Maritime Organization. We made historic presentations to this body, marking the first time that the representatives of nations and industry ever heard the perspectives of Arctic indigenous peoples.

London is far from home. Yet, the decisions made there have far-reaching implications for my home, my family, and the ocean we depend on. Will especially sensitive areas be set off limits to ships? Will precautions be taken to prevent oil spills and shipwrecks? Will communities be equipped to respond to emergencies and define new infrastructure? Will rules for ships honor both marine mammals and the hunters who pursue them?

Our input has already had a big impact.

Delegates have now agreed to write new rules for heavy fuel oil in the Arctic—a toxic oil used to power ships that would be catastrophic if spilled. And, guidelines are in the works that will help mariners avoid Arctic marine mammals when they plan their ship’s travel through the Arctic.

The stronger the protections we put in place today, the greater the chances that future generations will be able to enjoy our traditional ways of life in Alaska.

To me, that’s something worth fighting for.