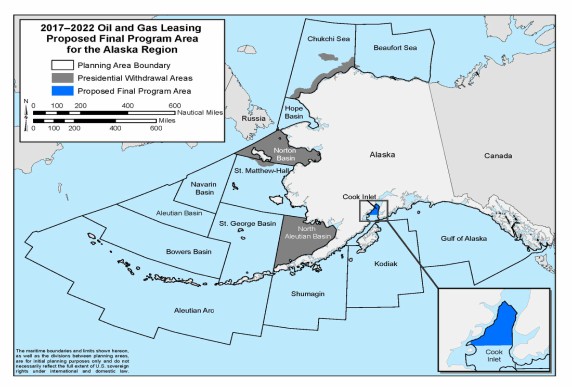 The proposed sale is listed in the draft proposed 2019-2024 National Outer Continental Shelf Oil and Gas Leasing Program that the Secretary of the Interior announced on Jan. 4, 2018. The agency has set a 30-day public comment period for this call for nominations. Millions of Americans have already voiced their opposition to new offshore leasing in the Arctic and other ocean areas.

Important areas of the Beaufort and Chukchi seas were permanently protected under the Obama administration because of their ecological and subsistence values. Just last week, a federal district court in Alaska rebuffed efforts by the Trump administration and the oil industry to dismiss a lawsuit challenging Trump’s attempt to jettison a permanent ban on new offshore oil and gas drilling in the Arctic and Atlantic oceans.

“Rushing ocean lease sales in the Arctic is opening a threatening door of destruction to Alaska Native culture and food security. As an Inupiaq woman I oppose this threat to our future, the future of all Alaskans and all life on this planet. Opening the oceans to oil development would eliminate the chance of my grandchildren truly knowing who I am.”

“Planning for a Beaufort lease sale this early in the process of crafting Trump’s five year plan is a clear sign that the decision to include the Arctic has already been made. Just today it was revealed that the Trump administration coordinated with Florida Governor Rick Scott on Gulf leases in an effort to improve his election prospects. Likewise, this Beaufort sale is about giving a win to the Alaska delegation by starting the process to fast-track getting leases into the hands of the oil industry without full, fair and open debate. It’s clear that Trump’s offshore process is driven purely by politics, and is not in the best interest of Americans.”