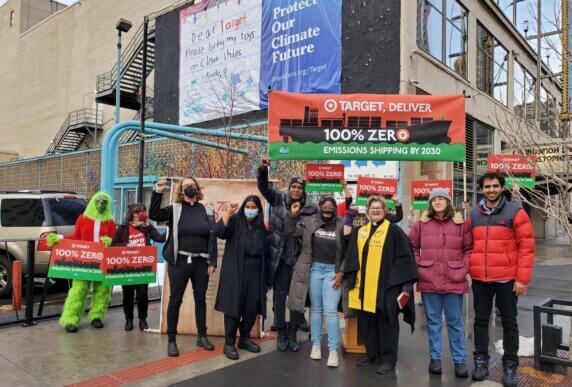 “Target’s digital sales have doubled during the pandemic and 95% of its shipments pass through West Coast ports,” said Minneapolis City Councilmember-elect Robin Wonsley Worbolah,“with catastrophic health impacts on the working class Black & brown communities nearby. I’m proud to be in solidarity with the mass multiracial working class coalition that is organizing across the country to demand fossil-fuel free, zero-emissions shipping. Our lives depend on it.”

Councilmembers gathered under a large billboard which reads: “Dear Target, Please bring my toys on clean ships. – Amelie, 9.”  Earlier in the day, Ship It Zero activists delivered a petition signed by over 20,000 people to executives at Target’s headquarters in Minneapolis.

“The climate crisis is here and any opportunity we have to manage and mitigate the impact of it is one we should take,” said Minneapolis City Councilmember-elect Aisha Chughtai. “Target has a responsibility to our communities to transition to zero emissions ocean cargo ships and take immediate action to create more sustainable communities.”

Due to pandemic-related trends, a record-breaking 100 fossil-fueled ships are currently idling off the shores of the Ports of Los Angeles and Long Beach, the nation’s largest port complex, responsible for 40% of imports to the United States. As a result, Target is responsible for dumping higher levels of particulate matter, sulfur oxide, and nitrous oxide, into port-adjacent communities. This contributes to up to eight years lower life expectancy in the West Long Beach, Wilmington, and San Pedro neighborhoods, largely comprising lower-income Black and Latinx families.

“We are calling on retailers like Target to do the right thing and take action on transitioning to zero-emission shipping practices to help save our planet. Because of the Ship it Zero campaign, we now know the outsized health and environmental impacts of Target’s shipping emissions throughout the ongoing COVID-19 health crisis. We must continue to advocate for healthy communities and sustainable practices for big retailers in this country,” said Minneapolis City Council Vice President Andrea Jenkins.

Similarly, imports into the Seattle-Tacoma ports are up 40% since 2019. Unlike California, Washington State does not have a distillate fuel mandate for oceangoing vessels. This likely means that the ships coming into these ports or idling in Washington waters are burning far dirtier fuel, contributing to even greater health-harming emissions per vessel to port and coastal communities. Even before the pandemic-driven cargo vessel crisis, Seattle communities suffered the worst excess mortality rates in the United States from ship exhaust exposures, with a rate more than double the global average for port communities.

“First Unitarian Society of Minneapolis calls on Target Corporation to make the move to zero-emissions ocean shipping with all haste. The emissions from container ships are causing real and lasting damage to the actual humans who live near port cities, especially in California,” said the Reverend Kelli Clement, Minister of Social Justice at First Unitarian Society of Minneapolis. “Target is our neighbor in Minneapolis, and in a global community, we are called to care about the actions Target has on neighborhoods far away from our own. Let us all work together for the day when there are no sacrifice zones, because people are always more important than profits.”

This event comes on the heels of a groundbreaking new report that found Target’s role in the massive pollution impacts on U.S. ports and coastal communities is “outsized.” This new report titled Shady Routes: How Big Retail and their Carriers Pollute along Key Ocean Shipping Corridors was released by Ship It Zero coalition members Stand.earth and Pacific Environment on Cyber Monday.

“Until recently, the massive climate and health-harming emissions from the cargo shipping industry have sailed under the radar. But the recent supply chain breakdown and congestion at the ports have underlined the issues stemming from goods being shipped across our oceans on fossil-fueled vessels. Addressing maritime emissions will not happen without bold commitments and concrete actions from the companies paying for cargo carriers to transport their goods. Target must take responsibility for the pollution their supply chains create, and the necessary actions to reduce emissions now and commit to 100% zero-emissions maritime shipping this decade,” Kendra Ulrich, Shipping Campaigns Director, Stand.earth.

The Shady Routes report uncovers the ocean shipping corridors and carrier companies favored by the four retail giants, the emissions impacts of those routes, and how the ongoing cargo shipping backlog has saddled U.S. port communities with increasing rates of pollution. The report has been covered by CNN, NPR, Business Insider, Yahoo News, The Verge, Common Dreams, and more.