Report is first to use previously inaccessible cargo and supply chain data, finds 15 companies responsible for as much sulfur oxide, nitrous oxide, and particulate matter pollution as tens of millions of vehicles and the climate pollution equivalent to 1.5 million homes 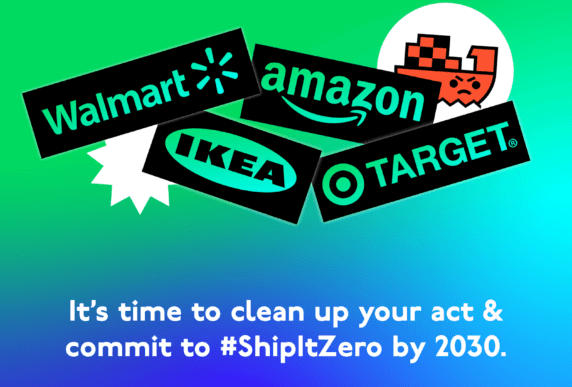 SEATTLE, WA — Just fifteen companies are responsible for emitting millions of tons of pollution from importing their goods into the United States on fossil-fueled ships, according to a study released today from Pacific Environment and Stand.earth. Shady Ships: Retail Giants Pollute Communities and Climate with Fossil-Fueled Ocean Shipping is the first study to quantify the environmental and public health impacts from some of the biggest American retailers’ reliance on overseas manufacturing and fossil-fueled, transoceanic shipping.

“Working class communities disproportionately of color bear the brunt of the toxic pollution from ocean shipping,” said Madeline Rose, Climate Campaign Director for Pacific Environment. “Major retail companies are directly responsible for the dirty air that sickens our youth with asthma, leads to thousands of premature deaths a year in U.S. port communities, and adds to the climate emergency. We are demanding that these practices change.”

By cross referencing a comprehensive set of cargo manifests with a dataset on individual ship emissions,
researchers were able to estimate the pollution associated with each unit of cargo on discrete shipping routes and, for the first time, assign those emissions to retail companies. Walmart, for example, was responsible for 3.7 million metric tons of climate pollution from its shipping practices in 2019, more than an entire coal-fired power plant emits in a year. Target, IKEA, Amazon, and eleven other companies were also investigated.

Collectively, the top importers of U.S. goods are responsible for emitting as much sulfur oxide, nitrous oxide, and particulate matter as tens of millions of U.S. vehicles every year. These emissions are some of the most dangerous and deadly types of air pollutants, contributing to asthma, cancer, and premature death, and increasing the mortality risk from respiratory-based illnesses like COVID-19.

The market for transoceanic cargo shipping has grown over the past several decades, and the pandemic accelerated the trend toward shipping goods bought online. Today, over 50,000 merchant ships carry around 80 percent of global trade, and ocean-going cargo volumes are projected to grow by as much as 130 percent by 2050. Every single merchant ship in operation right now runs on fossil fuels.

“In the face of record profits, major retailers and their shipping companies have no excuse to not invest in cleaner ways of doing business,” said Gary Cook, Global Climate Campaigns Director at Stand.earth. “Every year they stall, communities of color will remain saddled with the high costs of air pollution, and we miss the ever-narrowing window to address the climate crisis and ensure a livable planet. It’s time for retail shipping giants like Amazon and IKEA to stop moving their products on fossil-fueled ships and commit to 100 percent zero-emissions shipping by 2030.”

To end maritime climate and air pollution, advocates also launched the “Ship It Zero” campaign, calling on the largest maritime importers and most well known corporations to move their products off fossil fueled vessels and transition to 100 percent zero-emissions shipping in time to help keep global warming under 1.5 degrees Celsius, the target scientists say is needed to avoid the worst consequences of the climate crisis.

About Pacific Environment
Pacific Environment is a global environmental organization that protects communities and wildlife of the Pacific Rim. We support community leaders to fight climate change, protect the oceans, build just societies, and move away from fossil fuels toward a green economy.

About Stand.Earth
Stand.earth is an international nonprofit environmental organization with offices in Canada and the United States that is known for its groundbreaking research and successful corporate and citizen engagement campaigns to create new policies and industry standards in protecting forests, advocating the rights of Indigenous peoples, and protecting the climate.