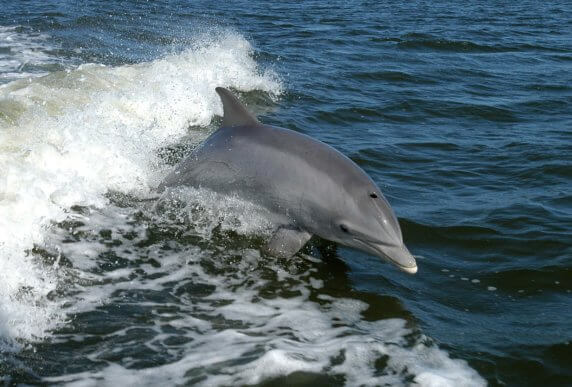 The federal government illegally granted the U.S. Navy permission to harm marine mammals nearly ten million times in Southern California and Hawaii over the next five years, according to a lawsuit filed today by the Natural Resources Defense Council (NRDC).  The permitting agency, the National Marine Fisheries Service (NMFS), finalized rules last month allowing the Navy to increase the projected marine mammal impact of its 2013-2018 sonar and explosives training activities by 1,100%, as compared to the previous five-year period.

“For whales and dolphins, the Navy’s plan to ramp-up training off our coasts is simply not sustainable,” said Michael Jasny, director of NRDC’s marine mammal protection project. “The science proving the link between sonar exposure and population decline is mounting. And so are the solutions that could prevent thousands of needless injuries and hundreds of deaths. There are more than 35 species of whales and dolphins that make Southern California and Hawaiian waters their home, including endangered blue whales, fin whales and hearing-sensitive beaked whales. All are at risk from this preventable harm.”

In its own environmental review, the Navy estimates that sonar training, underwater detonations, and gunnery exercises will significantly harm marine mammals 9.6 million times between 2013 and 2018.  The Navy’s authorization request to NMFS sought approval for nearly 9.6 million “takes” (or harms), including 155 mortalities, more than 2,000 instances of permanent hearing loss or other permanent injury, and millions of instances of temporary hearing loss or significant disruptions in vital behaviors—a 1,100% increase in projected harm from the previous five-year period.

“Despite our best efforts to provide informed and thoughtful critiques on the Draft Environmental Impact Statement for the U.S. Navy’s Southern California-Hawaii Testing and Training Range it seems that NMFS and NOAA have pretty much ignored our organization’s concerns and handed the U.S. Navy a carte blanche to do whatever they please,” said Michael Stocker, director, Ocean Conservation Research.

Of particular concern is the threat posed to beaked whales and endangered blue whales, which are expected to suffer tens of thousands of impacts, according to NMFS. Beaked whales comprise a diverse but little-understood group of deep-diving whale species that have proven to be especially sensitive to sonar exposure, and a recent government study showed their numbers plummeting off the west coast, noting that the Navy’s intensive training may be to blame. Blue whales—the largest animal to ever live on the planet—were decimated by whaling in the 19th and 20th centuries and, despite a 1966 global hunting ban, the species has struggled to recover. Once thought only marginally impacted by sonar, scientists are now finding potentially distressing links between sonar and blue whale recovery in Southern California.

“These tests will not only kill hundreds of whales and dolphins, but will also harm animals nearly ten million times in the next five years. As Americans we are alarmed that this is even on the table,” said Stephen Wells, executive director of the Animal Legal Defense Fund. “Yet again, animals are being cruelly betrayed by the very agency responsible for protecting them.”

Military sonar activities have been linked to dozens of mass strandings of marine mammals around the world. Pioneering new science, conducted in part by NMFS and Navy scientists, is demonstrating that the behavioral impacts of repeated sonar exposure can be debilitating and far more serious than previously understood.  These impacts lead to disruption of normal feeding, breeding, and migration.

“The sonar will also threaten the western gray whale, one of the most endangered whales in the world,” said Doug Norlen of Pacific Environment. “With a population of only about 150 individuals, including 30 females of calving age, any injuries or deaths would be devastating. Surely the Navy can find a way to protect our seas without killing its wildlife.”

In particular, recent studies show that exposure to mid-frequency active sonar causes beaked whales and endangered blue whales to break off their feeding behavior, to an extent that survival and reproduction may be affected. According to NRDC’s lawsuit, NMFS wrongly disregarded these findings when it authorized the Navy’s activities, and the Navy did the same when it concluded that its activities were consistent with California’s coastal policy.

Common-sense measures would significantly decrease the harm to California and Hawaii’s aquatic species.  The most important of these is to avoid important habitat for vulnerable species, like endangered blue and fin whales, beaked whales, and migrating gray whales – which the scientific community and the Obama administration itself acknowledge to be the most effective available means of protecting marine mammals.

Other measures include taking practicable steps to avoid dangerous activities such as sonar training and underwater detonations at night, when marine mammals are extremely hard to detect; using the Navy’s own acoustic monitoring network to help detect marine mammals; and, except when critical to meet training needs, reducing ship speed during May through October to 10 knots while transiting areas important to baleen whales, to reduce the risk of vessel collision and death.

Today’s lawsuit challenges NMFS’s permit authorization of takes under the Marine Mammal Protection Act (MMPA), as well as its finding under the Endangered Species Act that the Navy’s activities will not jeopardize the survival or recovery of endangered blue whales. The suit also challenges the Navy’s determination under the Coastal Zone Management Act (CZMA) that its proposed activities are consistent with the enforceable policies of California’s Coastal Management Program, despite a unanimous rejection of that very determination by the California Coastal Commission.

“Cetacean Society International has been honored to follow NRDC’s leadership since the battle over military sonar operations began in 1996,” said William Rossiter, Executive Director. “The unnecessary destruction of marine life and habitats is scientifically proven, the Navy’s mitigation efforts are a disgrace, NMFS’ rubber stamp permits are irresponsible, many in the Navy know solutions are possible, and CSI knows the Navy can meet its national security obligations without harming everything that gets in their way.”

Plaintiffs represented by NRDC’s lawyers include the Animal Legal Defense Fund; Pacific Environment; Cetacean Society International; and Michael Stocker, a marine bio-acoustics researcher and director of Ocean Conservation Research. This case continues NRDC’s longstanding campaign to combat the proliferation of undersea noise and, in particular, to curb the Navy’s use of sonar and explosives without adequate protective measures.

Pacific Environment, headquartered in San Francisco, protects the living environment of the Pacific Rim by promoting grassroots activism, strengthening communities and reforming international policies. For over two decades, we have partnered with local communities around the Pacific Rim to protect and preserve the ecological treasures of this vital region. Visit www.pacificenvironment.org to learn more about our work.

The Natural Resources Defense Council (NRDC) is an international nonprofit environmental organization with more than 1.4 million members and online activists. Since 1970, our lawyers, scientists, and other environmental specialists have worked to protect the world’s natural resources, public health, and the environment. NRDC has offices in New York City, Washington, D.C., Los Angeles, San Francisco, Chicago, Bozeman, MT, and Beijing. Visit us at www.nrdc.org and follow us on Twitter @NRDC.

Ocean Conservation Research is focused on understanding the impacts of human-generated noise on marine life; using our findings to inform ocean policy and practice.

ALDF was founded in 1979 with the unique mission of protecting the lives and advancing the interests of animals through the legal system. For more information, please visit aldf.org.