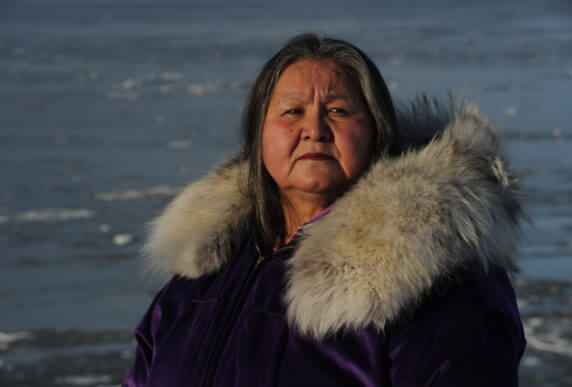 Caroline Cannon on the shore of Cook Inlet, near Anchorage, Alaska. She is an American environmentalist and was awarded the Goldman Environmental Prize in 2012, for her fight for protection of marine ecosystems against pollution from the petroleum industry.

SAN FRANCISCO, CA — Pacific Environment is pleased to announce that Caroline Cannon will receive the Goldman Environmental Prize this evening in San Francisco. We nominated Ms. Cannon for this prestigious award for her efforts to protect her Arctic homeland from offshore oil and gas development.

Ms. Cannon, an Inupiaq and lifelong resident of Point Hope, on Alaska’s Arctic Slope, says her responsibility to protect her community motivates her to fight development that could destroy ecosystems that supply traditional food resources. “Since time immemorial, we have depended on the Arctic Ocean to sustain us. It is our garden,” she explains. “Oil and gas development poses significant threats to the bowhead whale, along with other marine mammal species and fish that feed our people.”

Ms. Cannon has been an active leader in Point Hope for more than 30 years, but her struggle against drilling began after a 2006 oil spill in Alaska’s Prudhoe Bay. “The impact of that spill showed me that we are not prepared to react if the same thing were to happen to Point Hope,” she says. “Most of the year the sea is covered by ice which would trap the oil underwater for months with no way to clean it up.”

She has since become the strongest and most consistent voice against drilling in Arctic seas, traveling across Alaska and to Washington D.C. to take her message to government and industry. “As a tribe we do not have the funding and resources that the big corporations do to influence politicians, she says, “but I will continue to do everything I can to make sure the voice of Point Hope is heard on Capitol Hill.”

But while Ms. Cannon takes her case to the centers of state and federal power, her motivation to protect her “garden” is rooted firmly in the traditional Inupiaq culture of Point Hope, where the health of the population is inexorably linked to the abundance of surrounding Arctic ecosystems. “This fight is not about me, it is about the entire community of Point Hope, and the wild, untouched nature of the Arctic.”

“We congratulate Ms. Cannon on receiving this prize,” says Pacific Environment Executive Director Alex Levinson. “Her resilience in defense of her community is inspirational, and her successes exemplify Pacific Environment’s vision of environmental change through grassroots advocacy.”