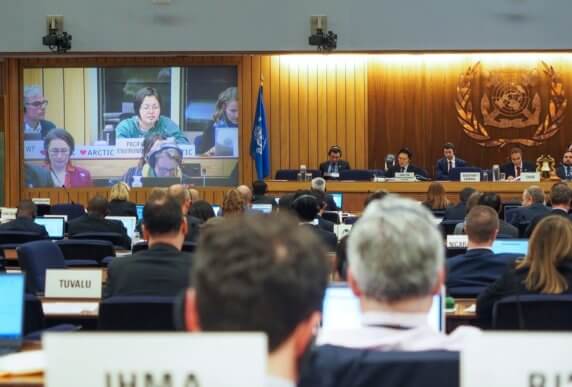 Mellisa Heflin, Executive Director of Bering Sea Elders Group, is seen on the screen as she speaks to a United Nation's shipping committee in support of the heavy fuel oil ban.

London, Friday February 21, 2020: NGOs and Indigenous groups today cautiously acknowledged progress by the International Maritime Organization (IMO) and its Member States in agreeing on a draft regulation on heavy fuel oil (HFO) use and carriage in the Arctic, but denounced the inclusion of loopholes in the text that mean the ban will not come into effect until 2029, leaving the Arctic exposed to the growing threat of HFO spills for close to another decade.

The draft new regulation for HFO use and carriage was agreed during this week’s meeting of the IMO’s Sub-Committee on Pollution Prevention and Response (PPR7) – dubbed the IMO Arctic Summit. The draft will be forwarded for approval to a meeting of the Marine Environment Protection Committee in October 2020 (MEPC 76).

“While the IMO has made some progress this week on controlling heavy fuel oil use and carriage as fuel in the Arctic, it is outrageous that Member States are prepared to accept another decade of threats from HFO spills to Arctic communities, the environment and wildlife,” said Dr Sian Prior, Lead Advisor to the Clean Arctic Alliance, a coalition of 18 non-governmental organisations. “With the climate crisis already having significant impacts across the Arctic region and routes opening up to increased ship traffic, IMO Member States must take a more ambitious stance later this year, by agreeing to rid the Arctic of HFO in 2024.”

The draft HFO regulation proposes that there will be no change in the use and carriage of HFO in the Arctic before the middle of 2024 when the regulation takes effect. The draft regulation means that the Arctic will not be rid of HFO until July 2029; in the meantime a loophole in the text will allow Arctic countries to permit continued use of HFO by their vessels. A second loophole means that ships with double hulls or protected fuel tanks will also be able to carry and use HFO as fuel until 2029. In addition, there was further delay on an action to reduce black carbon emissions from shipping that will affect the Arctic, despite the IMO and its Members working on this issue for nine years.

An initial examination of the draft regulation by the Clean Arctic Alliance suggests, based on current Arctic shipping levels, the loopholes mean over three-quarters of the HFO used in the Arctic could be exempt or delayed from implementing the regulation, which equates to more than two-thirds of the HFO carried on board vessels as fuel.

Of further concern is that these loopholes will cause an increase in HFO use and carriage in the Arctic. HFO use is already increasing – between 2015 and 2017 there was a 30% increase in the numbers of ships operating on HFO – and this is likely to carry on rising [1] – and the loopholes will mean that as older ships (covered by the regulation) are replaced with new ships with double-hulls or protected fuel tanks (not covered by the regulation until 2029), so the amount of HFO used and carried in the Arctic will increase.

The Clean Arctic Alliance is calling on IMO Member States to invest further effort to strengthen the implementation timelines and tighten or better still, remove the loopholes which delay the implementation of the draft regulation for double-hull and vessels with protected fuel tanks and which allow waivers.

“IMO Member States must now step up to their obligations to pursue additional safeguards; if HFO continues to be burned in the Arctic until June 2029, Arctic coastal communities will be subjected to the risk of HFO spills and higher levels of air pollution – so it is in the best interest of Arctic States to be expedient in phasing out HFO in both domestic and international Arctic waters sooner,” added Prior. “In the coming months, the IMO and its member states will be considering measures requiring ships to switch away from HFO and move to distillate or other cleaner fuels. ”

“Inuit Circumpolar Council Canada wishes to express our encouragement that a text toward restrictions on the use and carriage of heavy fuel oils in Arctic waters has been formulated. However, we remain deeply concerned about the potential negative impacts that exemptions will continue to put our communities and ways of life at risk. We will continue advocating for a full ban to protect our Indigenous communities and our environment,” said Lisa Koperqualuk, Vice-President of Inuit Circumpolar Council Canada.

“There are concerns about the timeline for introducing the heavy fuel oil ban, and the importance of protecting and connecting our holistic life and our marine environment, which includes our land, air, sea and most importantly ice. Based on the consistent guidance of our Elders and for our future generations we are going to continue to advocate for the heavy fuel oil ban as our indigenous Arctic people have been resilient in this area since time immemorial,” said Mellisa Johnson, Executive Director of the Bering Sea Elders Group.

“I am very concerned about the consequences and potential impacts of continued use of HFO in the Arctic and what it will mean for my family on St. Lawrence Island in the Bering Strait,” said Verner Wilson III, Senior Oceans Campaigner at Friends of the Earth US, a Siberian Yup’ik Inuit who was born and raised in Alaska. “Even if the United States strictly applies the provisions of the regulation, my community and our way of life could be unfairly damaged as a result of the actions of other Arctic States exempting their ships for a whole decade from now.”

The IMO has a further opportunity to agree action to reduce black carbon emissions that have an impact in the Arctic, by switching from HFO to distillate or cleaner fuels, at MEPC 75 in late March 2020.

About HFO and Black Carbon

Heavy fuel oil is a dirty and polluting fossil fuel that powers ships throughout our seas and oceans – accounting for 80% of marine fuel used worldwide [1]. Around 75% of marine fuel currently carried in the Arctic is HFO [2]; over half by vessels flagged to non-Arctic states – countries that have little if any connection to the Arctic.

The Arctic is under pressure – climate change is fuelling temperature rises double the rate of further south. As sea ice melts and opens up Arctic waters further, even larger non-Arctic state-flagged vessels running on HFO are likely to divert to Arctic waters in search of shorter journey times. This, combined with an increase in Arctic state-flagged vessels targeting previously non-accessible resources, will greatly increase the risks of HFO spills.

Already banned in Antarctic waters, if HFO is spilled in cold polar waters, it breaks down slowly, proving almost impossible to clean up. A HFO spill would have long-term devastating effects on Arctic indigenous communities, livelihoods and the marine ecosystems they depend upon.

Black carbon, a harmful air pollutant, is the product of incomplete combustion of organic fuels, and contributes from 7-21% of shipping’s climate warming impact [3]. The largest sources of BC are fossil fuel, biomass and biofuel combustion. Ships emit more BC per unit of fuel consumed than other combustion sources due to the quality of the fuel used. BC has human health impacts and is a potent climate forcer. When emitted in the Arctic, Black Carbon particles fall on snow, on glacier ice and sea ice, reducing their reflectivity (albedo) and increasing the absorption of heat. As multi-season sea ice recedes due to climate change, Arctic waters will open up to increased shipping – which could lead to increased Black Carbon emissions, fueling an already accelerating feedback loop.

[1] Estimation based on the increases that show HFO use between 2015 – 2017 (in following report) and shipping is increasing in the Arctic, number of vessels using HFO is set to rise.

Comer, B., 2019. Heavy Fuel Oil and Black Carbon in the Arctic, 2015 to 2017. Presentation to PPR 6, London, February 2019. https://theicct.org/blog/staff/imo-agrees-we-can-control-black-carbon-emissions-ships-will-we

The following not-for-profit organisations form the Clean Arctic Alliance, which is committed to a ban on HFO as marine fuel in the Arctic: