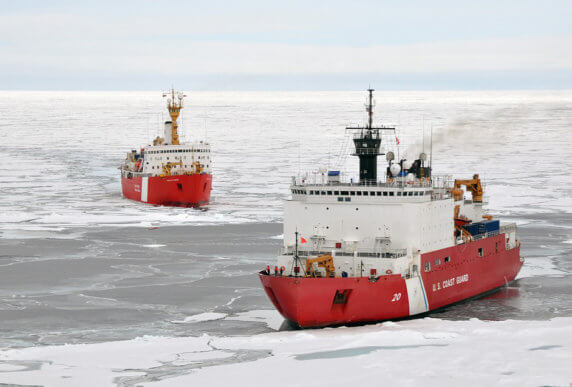 Former U.S. Coast Guard commandant Admiral Robert Papp is visiting Alaska for the first time in his new capacity as the U.S. special representative for the Arctic. Admiral Papp was appointed last month by U.S. Secretary of State John Kerry.

This is a proposal requesting Admiral Robert J. Papp to take action on including a ban on heavy fuel oil use in the Arctic as part of the Polar Code.

New ice-free waters in the Arctic are setting the stage for an industrial and shipping boom on an international scale. According to the U.S. Coast Guard, Russia estimates that last year three billion tons of cargo moved from Europe through the Bering Strait. By 2017, estimates are that 25 billion tons will move through the Northeast Passage and by 2020, 50 billion tons. This is a significant increase in Arctic shipping and the implications are enormous for both indigenous peoples as well as our Arctic environment.

Under international law, the IMO is responsible for developing rules to improve shipping safety and environmental protection. Currently, the IMO is working on developing a Polar Code to achieve that for both Arctic and Antarctic shipping.

The Polar Code comes to a crescendo this October and November as the IMO will finalize the draft language for the Code, with final adoption in spring 2015. Our primary goals at Pacific Environment are to seek U.S. support to: 1) defend positive provisions in the draft code; and, 2) secure commitments from IMO to deal with those issues not now adequately addressed in the next phase of the Polar Code.

So far, the Polar Code’s strongest provisions are:

Some of the glaring omissions or problems within the current Code include:

The Arctic Council should adopt a resolution urging the IMO to prohibit the use of heavy fuel oil by shipping in the Arctic and near Arctic waters. This will produce a number of significant environmental benefits, including, among other things, the reduction of black carbon emissions and risk of spills that could severely impact the Arctic climate and the health of indigenous and other peoples living there.

Although many smaller vessels in the Arctic operate on distillate marine fuel, a substantial portion of traffic by large vessels in the Arctic continues to use heavy fuel oil which is harmful to the climate, the environment and human health, particularly in polar regions. In fact, the use and carriage of HFO has been banned in Antarctic waters by the IMO.

Black carbon is produced by ships through the incomplete combustion of diesel fuel. Black carbon is a potent climate-forcer. Recent analysis estimates that it is the second most important climate-forcing agent, exceeded only by carbon dioxide. International shipping is a significant emitter of black carbon, with estimated emissions of between 71,000 and 160,000 metric tons annually. Requiring ships sailing in Arctic and near-Arctic waters to use distillate fuel rather than HFO would result in significant reductions in black carbon emissions.

There are other compelling reasons to prevent the use of HFO in Arctic waters. First, spills of HFO in marine environments are generally far more detrimental than spills of distillate fuels. When spilled, lighter, more refined marine fuels naturally disperse and evaporate much more quickly than HFO. Moreover, HFO is nearly impossible to effectively clean up in icy Arctic waters.

The Arctic Council’s Arctic Marine Shipping Assessment stated that: “The most significant threat from ships to the Arctic marine environment is the release of oil through accidental or illegal discharge.” Large ocean-going vessels operating in the Arctic not only burn HFO as fuel, but they also can hold significant quantities of this fuel and presumably would be traveling with full bunker tanks, as fueling options in the region are limited.

Second, banning the use of HFO would also obviate the need to dispose of its considerable waste sludge. This sludge generally constitutes about one to five percent of HFO consumed, and it must be discharged onshore, incinerated, or burned as fuel after further processing.

We at Pacific Environment request leadership from the Office of the Special Representative for the Arctic to support a commitment in the Polar Code to include a ban on the use of HFO for shipping in Arctic waters.