NEWS FROM THE FIELD: Offshore Oil Drilling Protests in Anchorage 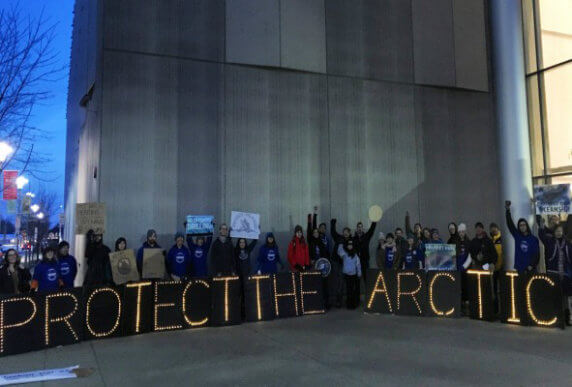 On February 21, I joined dozens of impassioned Alaskans to protest the Trump administration’s reckless plan to sell nearly all our coastline to Big Oil.

Standing outside the Dena’ina Center in Anchorage, I watched through the fog of my breath in the chilly winter evening as Alaska Native activists called the plan a violation of human rights.

The administration had organized only two meetings for the entire state, held at the same time, and neither gave people the opportunity to speak their mind on the record, as a formal public hearing would.

Inside the convention center in Anchorage, the Bureau of Offshore Energy Management (BOEM) had set up a video, played on a loop, touting the benefits of oil and explaining the oil and gas leasing program. In another room, employees waited for questions, standing quietly next to poster boards promoting oil drilling. One of the posters read, “Why is oil important?” Not surprisingly, not one poster asked, “Why is offshore oil drilling dangerous?”

There was also a computer station where attendees could type in their comments. But that wasn’t good enough for the activists in attendance.

Exposing the meeting for the undemocratic sham it was, indigenous protesters stood in a circle, reading comments from residents in remote coastal communities who feared that offshore drilling might harm their traditions and lifestyle, wondering what a catastrophic oil spill would do to the water and land their ancestors have lived on for thousands of years. After each message, the group chanted, “These are voices that can’t be here, we will speak them loud and clear.”

The protests were captured by local CBS and NPR stations, but coastal Alaskan voices need all the support that they can get. Will you add your voice and tell President Trump and Interior Secretary Zinke that we want to #ProtectOurCoast?

Thank you for all you do to protect Alaska’s beautiful coastline from catastrophic oil spills.