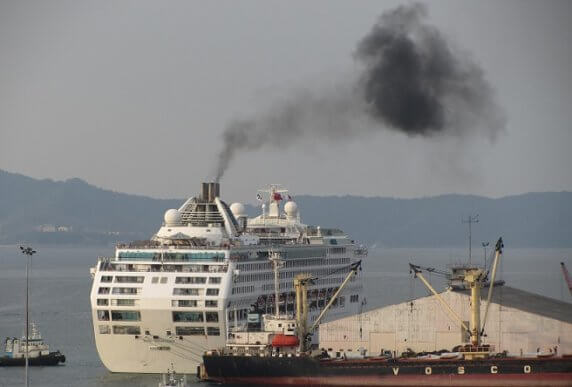 The Sun Princess belches a thick cloud of black exhaust. Princess Cruises is a subsidiary of Carnival Corporation.

Imagine: Sheer walls of blue ice wedge their way through mountains to meet the sea. Humpback whales rise to the surface to feed on gulps of herring and krill. Seagulls flock to the whales’ cavernous open mouths to snatch a meal. Small coastal communities that live as one with the land and sea.

For more than one million cruise ship passengers a year, these scenes are the backdrop of family vacations and romantic getaways in Alaska. Thousands more marvel at similar landscapes across the Northern Hemisphere: in Greenland, Iceland, Svalbard, and Norway. But what those ships leave in their wake threatens everything special these passengers have come to see.

For passengers on a Carnival Corporation cruise ship, their voyages are likely powered by heavy fuel oil—the dirtiest fuel on the planet.

Now, thanks to a new interactive map from our Clean Up Carnival Coalition, we know for sure that Carnival ships travel through or near wildlife habitat in Alaska and the Arctic and most of those ships carry heavy fuel oil.

The map shows web-like routes weaving in and out of fjords in Norway and around the islands of Southeast Alaska. All along these colorful lines, ships release toxins into the air and sea. These toxins harm local communities, wildlife, as well as the ship’s own passengers.

Wildlife like belugas, bowhead whales, narwhals, orcas, and walruses are already at risk due to shifting feeding grounds, changing temperatures, and sea ice reduced in span and thickness.

The pollution that cruise ships leave in their wake adds more stressors to these vulnerable species. Even vessels operating farther south can affect marine mammal habitat up north because pollution travels vast distances via wind and waves.

But it doesn’t have to be this way. No cruise ship, or any vessel for that matter, has to be a floating doomsday device. Every ship can operate on safer, less-polluting fuels with minimal, if any, modifications.

Ultimately, stopping the use of fossil fuels is the safest solution—and an achievable one.

Already, many countries, companies, and organizations across the world have committed to clean shipping and cruising. To protect the fragile Arctic and its unique ocean life from pollution, all ships must commit to switching to clean fuels. That’s why we’re calling on Carnival and its CEO Arnold Donald to immediately stop using heavy fuel oil.

You, too, can put pressure on Carnival to protect Alaska and the Arctic by taking the Clean Cruising Pledge. Carnival Corporation claims that environmental stewardship and sustainability are core company values, but they need to show us that they really mean it. Let them know that as long as Carnival is burning heavy fuel oil in Arctic and Alaskan waters, you won’t be sailing on their ships.