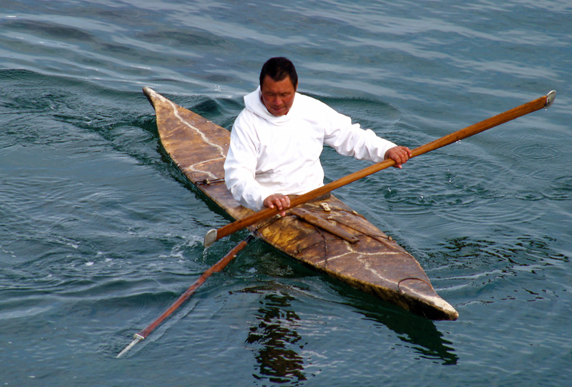 With climate change melting Arctic ice at an ever alarming rate, we know big changes are in store for this pristine environment. But what impact will the big meltdown have on people?

I have talked with climatologists who say that one big impact will be erratic weather. High pressure tends to center over the coldest sectors of the planet, which greatly influences air and water currents. For example, because of the shrinking Arctic ice pack, the high pressure concentration has been shifting toward Greenland. This high pressure air concentration is making Greenland a more stable cold sink because, there, ice covers a solid land mass.

Here in Alaska, the shifting currents have resulted in one of the warmest summers on record—with record-breaking temperatures across the state. While some winter-weary Alaskans relish the prospect of warmer summers, the instability of high pressure centers in the Arctic will likely result in more unpredictable weather events.

This weather volatility has big implications for cities threatened with rising sea-levels and aberrant storms. But no one else is more threatened than the people who live in the Arctic and who depend on its environment for their very sustenance.

We have all heard stories of polar bears and other marine mammals struggling to find food—as they have to travel further and further as the ice recedes. But the impact on indigenous peoples throughout the Arctic is just as crucial.

In many parts of the Arctic, indigenous peoples depend on subsistence hunting and fishing for the lion share of their food. Because they are so reliant on marine mammals, any threat to these mammals is a direct threat to peoples’ food security. Imagine living in a remote Arctic location with no prospect of growing your own food and being largely dependent on what you can catch. You might have a small grocery store in your village, but with exponentially high prices, you would never be able to afford to feed your family from it.

For indigenous peoples, food security is a matter of survival. While climate change is one source of insecurity, there are other threats as well.  As shipping routes expand dramatically across the Arctic to move goods more quickly between Asia and Europe, the pristine environment, upon which marine mammals and people depend on, is threatened by potential shipping accidents or groundings. In addition, usual discharges from ships could have profound impacts on degrading these cold, pure waters.

Pacific Environment has a special consultative status with the United Nations’ body, the International Maritime Organization (IMO) which is now writing new shipping regulations for these polar waters. Oddly enough, there are no indigenous groups represented at the IMO—even though indigenous peoples will be most affected by these rules.

Generally, the IMO is hounded by a bevy of industry representatives in an effort to weaken environmental regulation of the shipping industry.  At Pacific Environment, our role is to stand up to these special interests to protect the food security of people who depend on a healthy environment. Toward this end, this coming month, we will be bringing together indigenous leaders from Alaska and Russia to discuss ways to minimize the risks of increased shipping so as to protect food sources.

All in all, these big issues of climate change, shipping regulations, and food security involve not only environmental protection but also human rights. In the Arctic, it’s difficult to separate people and the environment. They are one and the same.