Do You Want to Help Protect the Arctic? 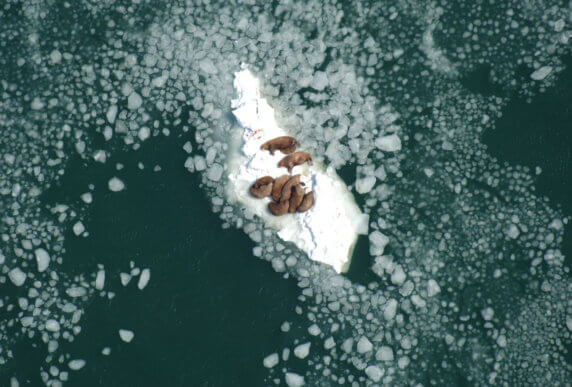 Thousands of bowhead and beluga whales, hundreds of thousands of walruses, one million seals, and millions of seabirds migrate through the Bering Strait region every year. Shown here are walruses nursing calves on ice south of Nunivak Island.

Last February, Indigenous and environmental allies and I sat at a table in London with international policy makers.

We had a proposal between us to protect communities and wildlife in the Bering Strait and Sea from increased ship traffic. At that moment, years of advocacy and community organizing hung by a thread.

In a surprise move, the decision-makers at the U.N. International Maritime Organization (IMO) had asked representatives of the U.S. government to explain the rationale and public input processes underlying the Arctic protections under consideration.

Not fully prepared, the delegates were unable to answer the questions. Fortunately, we were able to vigorously defend the measures. The Indigenous leaders gave firsthand accounts of why their region needed these protections.

Alaska Natives have lived in the area for millennia, relying on the resources of the Bering Sea for subsistence. It is their garden and grocery store and a vital component of their cultural heritage.

In addition, we described how many of the protection measures contained in the proposal had in fact been suggested by environmental activists and Indigenous leaders.

Our spirited defense of the protections that day convinced the international community to adopt new rules. In force since December 1, they now require ships to avoid fragile marine ecosystems—reducing the threat of oil spills, environmental disasters, and harm to wildlife and subsistence hunters.

The fragile Arctic needs special protections like these to defend it against the many looming harms of increasing ship traffic. Will you make a generous year-end gift right now to help us fight for additional protections?

Once rarely seen, ships are quickly becoming a familiar sight in the Bering Strait region.

We and allies are working hard to put protections in place well ahead of the anticipated onslaught of commercial ship traffic.

And we know that these protections work. A couple of years ago local communities and environmental allies pushed for similar protections further south in the Aleutian Islands. As a result, ship traffic has dramatically shifted away from sensitive and dangerous areas.

You can see why these protections are a big win for Arctic communities.

But much remains to be done to fully protect the fragile Arctic from the worst harms of commercial industrialization. Will you chip in to help us win similar protections farther north in the Beaufort and Chukchi seas?

We’re also pushing the international community to ban heavy fuel oil, the world’s dirtiest fuel, from the Arctic. If spilled, this dangerous oil would be nearly impossible to clean up.

And we’re pressuring the shipping industry to move off of fossil fuels and become 100% zero emission as quickly as possible—including the world’s largest cruise line operator, Carnival Corporation.

Will you help us protect Arctic wildlife and communities from this anticipated onslaught of commercial ship traffic now, before it’s too late? Please make a tax-free, year-end gift today.