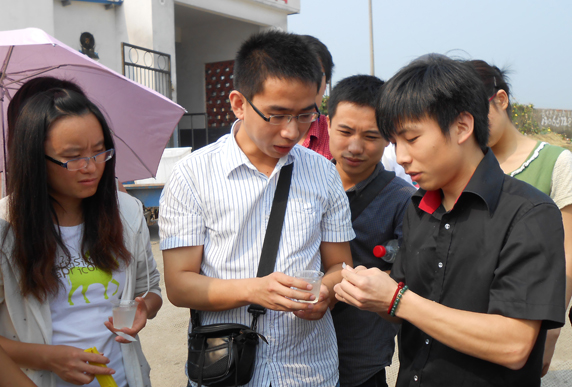 Mao Ge is a volunteer from the small city of Xiangtan, Hunan Province. He was contacted two years ago by our partner Green Hunan to join a network of river monitors who would get to know their stretch of the Xiang River, investigate pollution sources, and report on problems they found. Since then, he and his network of volunteers have conducted weekly visits to water quality monitoring sites along the Xiang River, the main artery that links industrial cities in Hunan to the Yangtze River downstream.

It was a surprise to Mao Ge, a middle-aged man who has lived in Xiangtan all his life, when a pollution “tweet” he posted on Green Hunan’s website went viral last year. His vivid image of untreated reddish-pink wastewater, illegally discharged by a dye factory, was “retweeted” 4,000 times.

The image also made it into local newspapers, and prompted the local Environmental Protection Bureau (EPB) to close down the offending factory. What’s more, the factory owner issued a public apology for the incident.

Mao Ge is just one of thousands of volunteers across China working with local non-governmental organizations (NGOs) to monitor water pollution. Networks similar to Green Hunan’s “Mother River Network” are spreading throughout China. There’s the Jiangsu “Qingyuan Action” network, set up by Nanjing-based Green Stone, the Huai River network set up by Green Anhui, and the Qingyi River network in south Anhui, set up by Wuhu Ecology Center. These and other similar networks involve teams of volunteers, often folks who are already members of a local volunteer association, recruited to keep an eye on polluters in their neighborhood. They take weekly trips to their designated monitoring sites, take photos, perform basic water quality tests, and share findings within the network, as well as with environmental authorities and the media. It’s proven to be a simple and effective way to remedy some of the worst and most obvious cases of illegal industrial pollution in China.

The strength of the networks comes from the passion of these volunteers, as well as the creative methods NGOs use to build and train the volunteers to become effective monitors. With so much concern over pollution in China, and so few effective ways for citizens to participate in solutions, it’s no wonder the “monitoring network” model is spreading fast.

Getting the “Watchdog Model” Right

Yet developing the network model took some time. One key precursor was the National Water Pollution Map, created by Beijing-based Institute of Public and Environmental Affairs (IPE). The map provides data from across China on which factories, industrial zones, and businesses have the worst pollution records in their community. Several years ago, with training and financial support from Pacific Environment, many groups began using IPE’s map to identify polluters, contributing data back to the map by performing on-ground “truth” checks on factory names and locations. They made their own local pollution maps, and started gathering stories from pollution impacted communities. Eventually, many groups were able to identify local allies who could take on monitoring work themselves. Pacific Environment’s annual partners meeting also provided a key venue for sharing methods.

In 2012, several participating groups formed the “Water Environment Learning Network” to further strengthen common monitoring methods and resources. Alibaba Foundation has also been a strong partner as well, both in providing needed funding and encouraging networks to form.

Watchdog Groups Have Teeth with Some Local EPBs

Stories like Mao Ge’s are becoming more and more common. Last year a volunteer association working with the environmental group Green Stone, in Jiangsu Province, discovered several illegally polluting chemical and textile factories at the Qinglong Industrial Park in the city of Nantong. They reported their findings to the EPB and local and provincial media. As a result, the EPB took action to punish five illegal polluters and implement measures to clean up sixteen pollution discharge points associated with the industrial park.

Other groups, such as Green Zhejiang based in Hangzhou, have taken their monitoring to a new level by employing the use of smart phones and a special pollution map developed using the free software platform Ushahidi. Green Zhejiang staff and volunteers in the field use their phones to create accurate records of the location and time of pollution incidents.

The model of identifying pollution problems via volunteer networks, and solving these problems reporting up either via media outlets or official government channels, will likely continue to spread. But there are challenges for the environmental groups and volunteers at the helm of these efforts:

At the same time there are many opportunities for groups that have developed a pollution monitoring program to grow and strengthen their efforts. With air quality a growing concern, some groups may be able to expand their programs and use similar volunteer monitoring methods to tackle air pollution (including use of widely available PM 2.5 detection tools and IPE’s recently released National Air Pollution Map.)

Some groups, such as Green Hunan, have developed strong reputations as environmental leaders in their community as a result of their visible monitoring efforts. To take advantage of their leverage, Green Hunan is developing a whole set of corporate social responsibility recommendations – which go well beyond pollution control – for 70 companies in Hunan that are listed on the stock exchange. Further, strong networks allow environmental groups to develop more strategic community-based campaigns, such as lawsuits to defend pollution victims.

We anticipate that as these networks replicate and expand, the extra motivation on the part of their local volunteer members – who are often directly impacted by pollution — will give rise to even more creative solutions for holding polluters accountable.