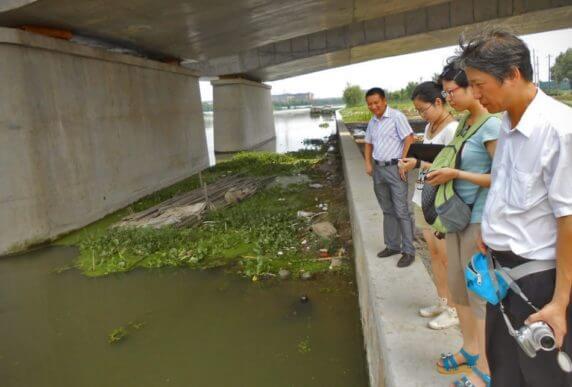 Our grassroots partners encourage citizens to become pollution watchdogs, helping uncover and clean up hundreds of factory discharges every year.

Similar incidents happen all over China, but these particular scenes did not play out in real life. They were part of a mock environmental hearing that I facilitated for Pacific Environment’s network of grassroots partners at a recent training in China.

It was a powerful learning exercise for the incredible leaders I work with because it trained them in the complex art of establishing good relationships with community members and local officials while pushing for less pollution and factory clean-ups.

This is an important skill because pollution in China is often so severe that relationships between unrepentant polluters, suffering communities, and overwhelmed or apathetic officials are fraught with tension, making pollution cleanup difficult.

This year, I’ve been collaborating closely with courageous leaders who fight every day to keep their communities safe from water and air pollution. Our goal is to find new ways to bring people together to negotiate pollution solutions that work.

Let me give you an example to show you what can happen when grassroots groups make sure that they and community members have a seat at the table with industry and government.

Over the past decade, giant industrial parks have been cropping up all over China. Officials initially hoped that it would be easier to manage pollution by separating industrial and residential spaces. But our local partner Green Stone realized that instead these parks were concentrating pollutants and allowing industry to pollute in secret without public or government oversight.

Green Stone’s home base is the city of Nanjing, Jiangsu Province—a hotspot for dangerous pollution due to a high concentration of factories that produce toxic substances like furniture polishes, dyes and paints.

To shine a light on this dangerous pollution, Green Stone made a move that is highly unusual in China: The group organized round-table meetings to bring together industrial park representatives, local environmental officials, and local citizens.

During the talks Green Stone and community members demanded that the park disclose pollution composition and emission amounts, citing the public’s right to know. As a result, the industrial park’s executives agreed to regularly disclose pollution data and to grant steady access to a community committee to monitor the park’s operations and make sure that it complies with all pollution laws.

This kind of in-person round table meeting can be a powerful tool to address pollution problems because it is more difficult for industry and government officials to ignore community health and safety concerns when people are voicing them face to face.

Finding more new ways for collaboration is key. As a Green Stone staffer put it, “Everyone in the community has to engage to help solve environmental problems.”