Walrus Haul-Outs on Beaches: Some Solutions 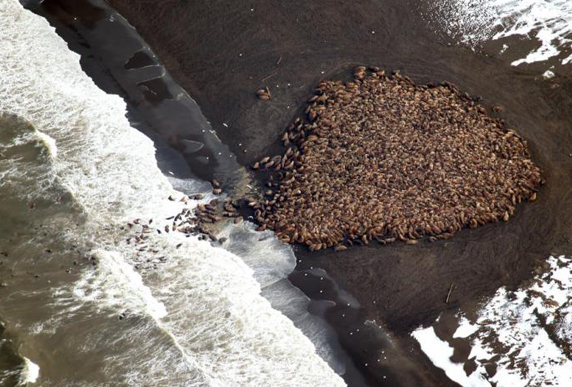 About 35,000 walrus hauled out on land near Pt. Lay, Alaska, in September due to disappearing summer sea ice.

In late September, about 35,000 walrus crowded together on a beach in northwest Alaska. This was not an isolated incident, but its sheer size attracted a lot of media attention. It clearly showed that climate change is severely altering walrus behavior.

These walrus haul-outs are happening on both sides of the Bering Strait. Pacific Environment’s indigenous partners in the Russian Arctic first started noticing a change in walrus behavior in the early 2000s. Unable to swim indefinitely, walrus depend on sea ice for places to rest periodically during their annual migration across the Bering and Chuckchi seas between Alaska and Russia. But with summer sea ice disappearing, thousands of walrus have lost their resting places out at sea and are now forced to gather on coastal lands.

But there are actions we can take to help the walrus survive. In response to the huge summer haul-outs, local indigenous leaders we partner with started engaging experienced local hunters and local youth to monitor the walrus and record data on their behavior. Then they shared the information with scientists who have been incorporating it into their own studies and making recommendations on how to protect the walrus in a changing Arctic. The scientists tell us this indigenous data-gathering is critical because of the dearth of information about changing walrus behavior in the face of disappearing sea ice.

Some scientists believe that the changes in the Arctic environment are so severe that the Pacific walrus’s very survival is at stake. Large, crowded groups of walrus are more likely to transmit diseases or trample calves. Increased concentrations of carbon dioxide in the ocean are also depleting the walrus’s food supply. And the increase in ship traffic through newly ice-free Arctic waters puts the walrus at further risk of being killed by ship strikes or harmed by oil spills and oily discharges.

Pacific Environment is one of only a handful of environmental organizations in the world helping to write international laws for ships traveling through the Arctic—and we have been instrumental in successfully adding a rule that requires mariners to avoid marine mammal populations, like walrus, when planning their voyage through Arctic waters.

Walrus are not the only animals facing depleted numbers or extinction because of climate change. Polar bears are also rapidly declining in numbers, and many other species, ranging from tiny plankton to narwhals, various whales and seals, and even land-based animals like caribou and fox, are facing declines due to disappearing sea ice and rising seas.

Pacific Environment will continue to work with indigenous partners and environmental allies to put in place new protections for Pacific walrus and other Arctic wildlife—through international laws and targeted conservation efforts.

For the walrus, and all other wildlife threatened by climate change in the Arctic.