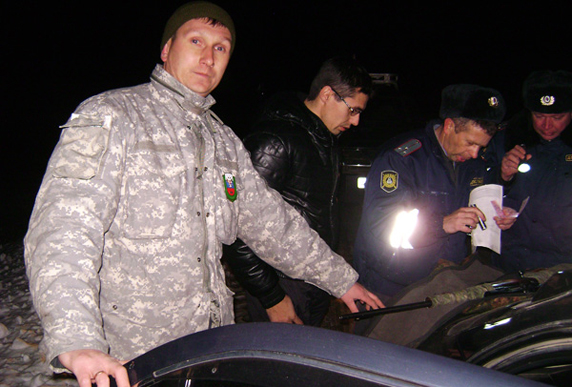 Zhenya grew up in southern Siberia, which is home to vast old forests filled with endangered Siberian tigers, Amur leopards, and bears. After leaving the military in the 1990s, Zhenya returned home and took a job at a local state park. Drawing on the skills he learned as special operations soldier, Zhenya patrolled the park’s forests in search of poachers who kill endangered tigers, leopards, and bears to sell their skins and other body parts to Asian buyers.

But poachers aren’t the only threat to endangered tigers, leopards, and other wildlife. Every year, huge human-caused wildfires ravage pristine taiga forest, destroying precious habitat. In 2009, Pacific Environment and our partner Phoenix Fund-a long-time ally in our fight for the preservation of the Siberian tiger-asked Zhenya to help us implement a ground-breaking project to reduce forest fires in the region, where 97% of forest fires are human-caused and large swaths of forests have been transformed into meadow and shrub-covered open woodlands because of the fires. Together, we work with local communities to contain forest fires and convince local residents to stop lighting fires intentionally to clear land for agricultural use or to collect scrap metal to sell in an attempt to supplement often meager local incomes.

Zhenya recruited and trained a team of volunteer firefighters to act as lookouts, respond to fires as soon as they start, and create firebreaks around local forests and in state parks to prevent large grass fires from becoming fully-fledged wildfires. His team also assisted local railroad companies with controlled burning to prevent accidental fires caused by railroad traffic. Finally, Zhenya helped recruit local community leaders to discuss the risks of intentional burning with local residents and ask them to sign a document to acknowledge that they understand that setting fires is not just dangerous and destructive but, in fact, illegal. Now if someone does start a fire, the community leader will return to confront the arsonist and involve local law enforcement if necessary.

Zhenya has been extremely successful. Last year, the total burned area in the territory he and his team monitor decreased by about 90% and not a single fire escaped into nearby forests. This change is due not only to extensive preventive measures and quick and effective responses to fires, but also to a real shift in attitudes among local citizens. They now understand that intentional burning endangers their homes, health, forests, and wildlife, and that they risk fines and punishment, which are enforced more frequently by local police as a result of Zhenya’s efforts.

Zhenya’s hard and incredibly effective work was recognized in 2013 when he was named Director of Enforcement for the newly-created National Park, Land of the Leopard. He now manages 60 rangers patrolling about 30 square miles of forest for poachers and fires.