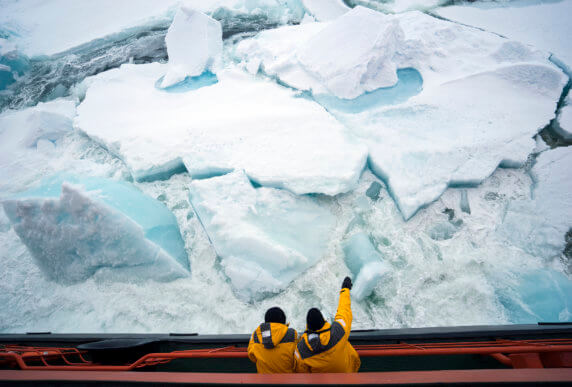 As sea ice decreases in the Arctic, more ships are using the region as a short cut to sail across the world, increasing the risk of oil spills and contamination from other pollutants.

As Arctic sea ice continues to diminish, more ships are traversing routes that were once death-defying feats. In the last decade, ship traffic through the Bering Strait alone has more than doubled.

The Arctic is home to hundreds of communities and tens of thousands of marine mammals like beluga whales, walruses, and seals. All this new shipping traffic where there was once very little, if any at all, brings risks to the people and wildlife that call the Arctic home.

Here is what you need to know about some key threats to the Arctic, and what we’re doing at Pacific Environment to protect this sensitive region.

Oil Spills are Uniquely Dangerous in the Arctic

Extreme weather conditions in a remote region make a bad situation worse. That’s what happened in 2004, when a ship lost power in the Aleutian Islands and, pushed aground by wind and waves, broke in half.

The accident dumped 350,000 gallons of fuel into the water, killing sea birds and marine mammals. During the rescue, a wave took down a helicopter and killed six people. Farther in the remote north, where it takes much longer to mount an emergency response, a similar accident would likely end with even more tragedy.

The extreme remoteness of the Arctic means that smaller spills, especially from lubricants and hydraulic oils that are washed off a ship’s deck, go unnoticed until the culprits are long gone. But, researchers find evidence of this pollution in seals and other marine mammals.

It’s Not Only Oil We Have to Worry About

Ships produce and dispose of sewage, food waste, and wastewater from showers and sinks. This waste is often dumped into the ocean with no regard to environmental harm. Garbage and debris also pollute the water, tossed from the ship’s deck by waves and wind, or intentionally dumped.

Bacteria and viruses in sewage can make humans and wildlife sick. The overload of nutrients can deplete the oxygen needed to support a healthy marine ecosystem, causing harmful algal blooms. Garbage may contain microplastics that move up the food chain, as well as larger pieces that entangle animals or damage habitat.

Underwater Noise is a Constant Issue

When viewing ships from the shore, they look like silent ghosts gliding across the ocean’s surface. Closer up, propellers, engines, and other machinery emit a jarring racket of noise. These sounds travel great distances underwater, much farther and faster than they do in the air. Other ship-caused noises in the Arctic include icebreakers scraping through slabs of ice and air guns blasts during seismic surveys by oil companies.

Making and hearing sounds is critical to marine mammals. Whales use echolocation to find food and navigate and for communication. Seals and walruses use vocalizations for mating displays.

All of These and More Affect Communities

For millennia, the ocean and its sea-ice ecosystem has been a garden for the coastal Indigenous communities of Russia and Alaska. Oil spills, pollution, and noise that affect wildlife also harm these communities, who have relied on the sea for thousands of years.

Open waters and more ships means thousands more people visiting fragile remote regions and tiny communities. A sudden influx of 1,000 tourists into a Native village, even while bringing much-needed revenues for local businesses and artists, can overwhelm local infrastructure and scare away wildlife.

In the event of a distressed cruise ship or an oil spill, remote communities become the first responders. Coast Guard presence is limited and usually far off in the Arctic. Communities rendering aid while help arrives will quickly exhaust their much-needed resources.

Advocating for the Protection of Communities and Wildlife

Together with community allies and environmental partners, we sit at the table with international policy makers to make sure that they are respecting community concerns and marine wildlife at every step in their decision-making.

In 2018, our efforts contributed to protection of three Bering Sea islands that support marine mammals, birds, and other wildlife, and the local communities. This year, we are capitalizing on those wins to seek the same protections farther north in the Arctic Ocean’s Beaufort and Chukchi Seas.

We’re also pressuring those same international policy makers to ban dirty heavy fuel oil in the Arctic; this dangerous oil would devastate the marine environment if spilled. The heavy fuel ban is gaining momentum, and we are keeping up the pressure and assisting Indigenous leaders who want to be included in the decision-making process.

The Arctic is facing rapid changes and we are doing everything we can to protect wildlife and ensure communities are able to continue their ways of life.