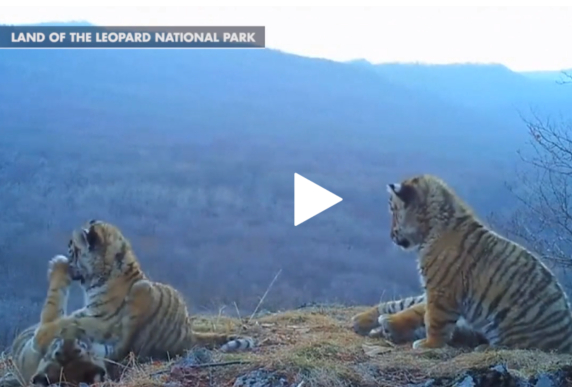 For the first time ever, four Siberian tiger cubs were caught on camera in the Land of the Leopard National Park in the Russian Far East’s Primorsky Krai—where most of the world's wild Siberian tigers lives.

In this cold weather season, here’s a heartwarming story from the Russian Far East. And while I’m not usually one for watching cat videos on YouTube, this story comes with the cutest footage I’ve ever seen of tiger cubs. Check it out!

For the first time ever, four Siberian tiger cubs were caught on camera in the Land of the Leopard National Park, in the Russian Far East’s Primorsky Krai (a maritime territory). The cubs playing with each other isn’t just amazingly cute, it’s also evidence that the attention and investment in helping tigers survive is paying off.

Like all tiger populations, the Siberian tiger population in the wild was driven toward extinction in the 20th century. Since the early 2000s, however, their population in Siberia has nearly doubled, now counting almost 600. In this 2013 throwback video from our YouTube channel, a local activist explains that technology and education are necessary to stop poachers—a primary threat to the tiger’s survival in the Russian Far East.

In 2008, the Russian Government created Land of the Leopard National Park —where the four cubs are having so much fun these days—to protect Siberian tigers, Amur leopards, and their habitat.

Pacific Environment funded these local activists as well as the installation of camera traps in the park (like the ones that captured footage of the four cubs), as well as in snow leopard habitat in the Altai Republic. The motion-activated cameras help researchers track population numbers, understand the behaviors and range of the animals, and decide how best to protect critical habitat.

It’s your support, and the support of other activists like you, that helped bring these cubs to life. Thank you.